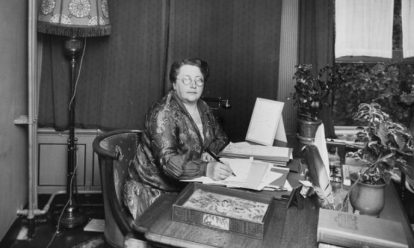 On October 3rd Professor Mineke Bosch (NL) will give the third Rosa Manus Lecture of Atria, National Institute on Gender Equality and Women’s History  titled A centenary of Dutch universal suffrage, or Gender and the politics of history and memory. There will be a comment by Dr Mari Takayanagi.

Mineke Bosch is Professor of Modern History at the University of Groningen. She is a renowned  expert in the field of history of political culture and citizenship, women and gender history and international women’s movements. Her publications include a biography of Aletta Jacobs: Een onwrikbaar geloof in rechtvaardigheid: Aletta Jacobs 1854-1929, (2005) and Strijd! De vrouwenkiesrechtbeweging in Nederland, 1882-1922 (2019), on the history of the women’s suffrage movement in The Netherlands. She was guest curator of the exhibition Strijd! 100 jaar vrouwenkiesrecht in the Groninger Museum (2019).

Dr Mari Takayanagi is an archivist and historian at the Parliament Archives in London. Her research focuses on women in politics in the early 20th century. She was joint project manager and co-curator of ‘Vote 100’, Parliament’s project to commemorate 100 years of the vote for some women and all men in 2018.

A centenary of Dutch universal suffrage, or Gender and the politics of history and memory

At the end of the parliamentary debate on the women’s suffrage bill, its initiator Henri Marchant, who in the course of the debate had been called a sissy by one of his opponents, made a remarkably emotional, in my view also touching appeal to his fellow parliamentarians, if not his fellow men:

‘Don’t look down on these women, don’t laugh at them. Rather, try to understand the causes of her pugnacity, her spirit of sacrifice, her stubborn tenacity. (…)’

In this Rosa Manus lecture Mineke Bosch probes the question of why it has been and still is so difficult in the Netherlands to understand the term universal suffrage as including votes for women. The question allows her to analyze women’s earlier attempts at commemorating women’s suffrage, as well as women’s efforts to write the history of women’s suffrage. Besides, she will reflect on the way in which the Dutch centenary has been celebrated, still not as the culmination, but rather as the negligible aftermath of universal male suffrage. Or have we been able to make a change?

You are welcome from 7.00 p.m. onwards. The lecture starts at 7.30 p.m. Both the lecture and the comment will be held in English. Prior to the lecture it is possible to visit the exhibition De straat op!, about women’s suffrage and activism in Amsterdam at the OBA Expo.

About the Rosa Manus Lecture

The Rosa Manus Lecture is a tribute to a woman who is of historical importance for the development of women’s position as fully-fledged political citizens and also in the field of history. Rosa Manus (1881–1942) played a crucial role in the women’s suffrage movement and the peace movement at both a national and international level. In 1935, she was one of the founders of the International Archives for the Women’s Movement (IAV), the precursor of the Atria-archive.

Through this annual lecture, Atria wishes to provide a critical, internationally oriented focus on academic developments that are relevant to women’s and gender history. It is therefore also perpetuating the memory of Rosa Manus and the historical significance of her work.