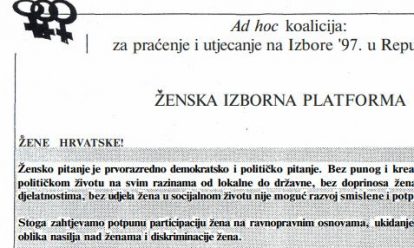 Summary:
The Women’s election platform is signed by the Ad hoc coalition for monitoring and influencing parliamentary election in Republic of Croatia in 1997, which was formed by 18 women’s NGOs and groups from all parts of Croatia. The fundamental demand for complete and equal political participation of women and abolishment of all forms of violence and discrimination of women is further
developed through six groups of demands. Those include (1) division of responsibility in home and of power in state, (2) right to work and pay, full employment and career, (3) legal, safe and free abortion and contraception, (4) end of violence against women, (5) social security and prevention of poverty, and (6) education for tolerance and equality.

The main thesis of the book is that Romania is more democratic for men than for women, and the simple existence of formal rights for women does not guarantee that they are exercised in reality.

Several administrative bodies insist that women use a double name. In an open letter to the parliament prior to the 1994 national elections the petition organisers remind the politically responsible of their duty to protect women’s autonomy and their rights.

The most important issues: Social security and economic independence of women, liberalisation of the abortion law, reform of the matrimonial law, equality in education and at work. It argues against all forms of sexism in society.