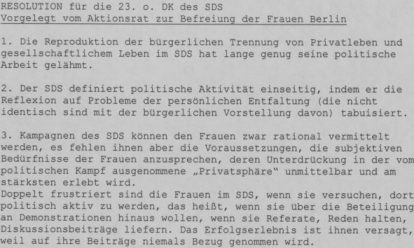 Summary:
The leaflet named gender based violence in the Sozialistischer Deutscher Studentenbund (SDS) as the hindrance for work and happiness in a new society, that must collectively formed at once. The paper was written by academic mothers that had been either socialized in the Federal Republic of Germany (FRG), the German Democratic Republic (GDR) or even in both societies. It argued that women with gender based solidarity were to temporarily organize separtly from men in order to contribute to the aim of a “cultural” revolution not just the taking power of a new government. It thus became the manifest for the second wave of feminism in West Germany and West Berlin.

This article is a speech that Elina Guimarães, a feminist jurist, gave for the colloquium “The woman in the contemporary society” in the late 1960’s.

The novel is about the daughter of a very conservative father who has old-fashioned ideas about the sexual relations between men and women, who is very jealous, exerting protective custody on his wife and daughters.