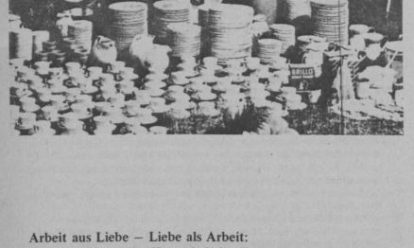 Summary:
The article is an early example of the new women`s history and at the same time a theoretical contribution to the international campaign for/against wages for housework. It is basically an analysis which demonstrates that unpaid housework as a task of virtually all women, is fairly recent and has emerged with the industrial and capitalist transformation of society since the 18th century. Only over time was housework (including child and husband care) on the one hand, exclusively attributed to women only; on the other hand, it was defined as non-work, that is “women`s nature“, whereas “work” was defined as paid work. Because of the size of the file illustrations have been eliminated from the digitised version.

The author points out three conceptions of the feminist struggle that she considers to be mistaken.