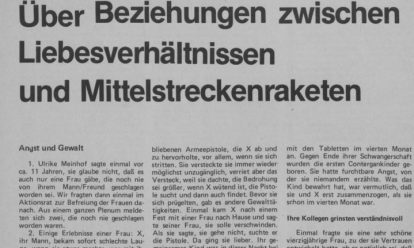 Summary:
The article is the publication of Sander`s lecture on February 17th 1980 in the Berlin Akademie der Künste, at the time when NATO planned to answer the deployment of sowjetic intermediate-range missiles SS-20 with Pershing II-missiles and at the same time bid the offer for disarmament. Against this “double resolution” protests in several European peace movements as well as in feminist groups were mobilized. Sander argued to start the feminist protests less in already existing organizations but rather by earnestly working on love relations. The article got published several times in diverse publications and also was translated into English and Dutch.

The articles touch upon a broad range of topics and vary from personal experiences to academic and research studies alongside details and reports of struggles and campaigns which were occurring contemporaneously.