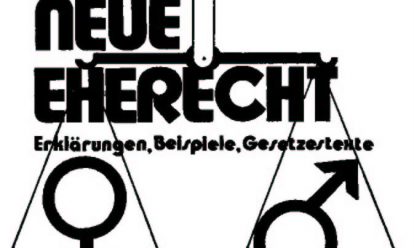 Summary:
In 1974 the MLF wrote this brochure to help people understand the results of the reforms of the matrimonial law. The brochure explains that after years of intense campaigning by women’s rights groups the law was finally amended in two steps: the law regarding the rights and responsibilities of spouses (1972) and the law regarding the marital property regime (1974). The first law acknowledges the full equality of married women. Previously, married women were regarded as minors before the law: Without the consent of her husband, who was officially head of the family, a married woman could not, for instance, buy, sell, donate, inherit, open a bank account or appear before a court. The second law deals with questions regarding property and marriage. In addition to the explanations of the law the brochure contains parts of the actual legal texts in its appendix.
The booklet was widely distributed throughout the country. Every marrying couple received a copy in the official ceremony.

The portuguese Women’s Liberation Movement presents, with this text, their first publication and the first portuguese feminist manifesto, produced after the implement of democracy.

Autonomy is the constant movement of the shared rule-setting of living together and a draft of new boundaries reflecting on the context of women’s movements.