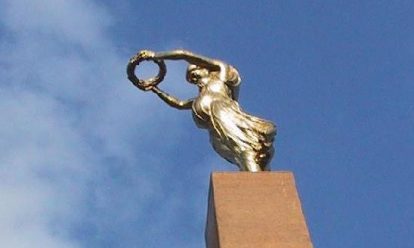 Summary:
The open letter is a feminist statement in the controversial debate caused by the artwork “Lady Rosa of Luxembourg” by Sanja Ivekovic. The sculpture reproduced the figure at the top of the war memorial, Gëlle Frau (Golden Lady, 1920). The temporary version (2001) was installed vis-à-vis the original. It honours the women who suffer mentally and physically in wars (rape, prostitution, etc.) and who take part in resistance. The new sculpture was visibly pregnant, renamed after Rosa Luxemburg and carried inscriptions on the plinth like “kitsch”, “whore”, “capital”, “virgin”. The artist took the figure out of anonymity and made her a subject, creating a strong contrast to the abstract polarized stereotypes of women in wartimes – saint or whore.
The sculpture provoked hateful, racist and sexist comments. The authors of the letter plead to seriously reflect about women’s rights, about the images of women in Luxembourg’s art world and to give feminist art more room in the public sphere.

Each issue of the publication features several thematic sections such as culture, politics, rights, documents, economy, women in the world, humour and photography.

This thematic issue of the magazine Cahiers du Libre Examen wanted to encourage reflection and discussion about women’s position in society.