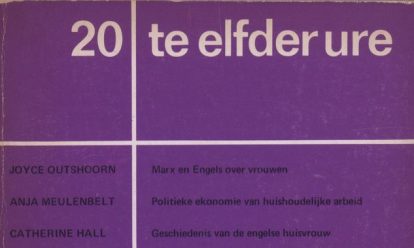 Summary:
This first feminist issue of Te Elfder Ure, a Dutch Marxist magazine, is as the editors explain, a first attempt to start the discussion on the position of women in capitalist society. In the first article the editors give an overview of the Dutch feminist movement from 1968-1975. The second article covers texts by Marx and Engels about women (Outshoorn). The third article discusses the meaning of house work in relation to feminist Marxist theories (Meulenbelt). Three articles in this issue are Dutch translations of foreign texts (Catherine Hall, Ana Davin and Juliet Mitchell). Other articles discuss women’s work in the 19th century, the early history of trade unions and the organisation of women, the contribution of feminist literary theory to ideological consciousness, the representation of women in Dutch literature by female authors, the origin and history of women’s magazines as a capitalist phenomenon and the abortion struggle. The ninth article consists of a conversation in which four women (the editors and Eva Wolf) tell each other about how they developed into feminist socialists. In addition, the editors added some poems ‘as they were conscious of the fact that prose can be quite dry’.

The situation of women in Slovakia during the real socialism and after the fall of the regime from the perspective of the private and public sphere.

The figure of the Nomadic Subject has been very influent in the Italian feminist context.