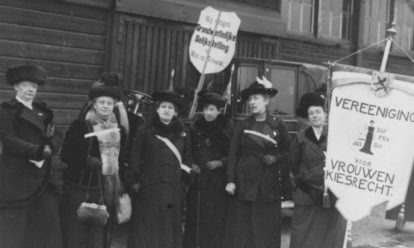 Dr. I. van der Tuin
Field of expertise: Feminist philosophy and feminist historiography
Short bio: Iris van der Tuin is assistant professor at Gender Studies, Department of Media and Culture Studies and the Research Institute for History and Culture, Utrecht University. She has recently been awarded a VENI grant by the Netherlands Organisation for Scientific Research (NWO) for the project ‘The Material Turn in the Humanities’. Van der Tuin is co-president of ATGENDER, the European Association for Gender Research, Education and Documentation. Iris’s PhD thesis was entitled ‘Third Wave Materialism: New Feminist Epistemologies and the Generation of European Women’s Studies’.

Prof. dr. W.D.E. Aerts
Field of expertise: Political history of gender in the Netherlands
Short bio: Mieke Aerts holds the Wilhelmina Drucker chair (for research in the political history of gender in the Netherlands) at the University of Amsterdam (UvA), Faculty of Social Sciences. Mieke Aerts has always combined a historical and philosophical approach in her research. She has published articles about the core concepts within gender studies, about the history and the political philosophy of feminism in the Netherlands and about the historical contributions of women in Dutch political culture. Her publications include ‘De Politiek van de katholieke vrouwenemancipatie’ (1994) and ‘In afwachting van de première’ (2005) about the first Dutch female minister.

Prof. dr. G.M.F. Römkens
Field of expertise: Gender based violence
Short bio: Renée Römkens is full professor and ho lds the Chair Interpersonal Violence, in particular Violence in Intimate Relationships, at the International Victimology Institute Tilburg (INTERVICT), which is partly funded by Aletta. Her research focuses on the power and limits of legislation for strengthening the empowerment of victims of violence. She is particularly interested in the role of law in multidisciplinary interventions where the criminal justice system and helping professions come together. Renée Römkens is also a member of Aletta’s academic advisory council.

Drs. M.E. Botman
Short bio: Maayke Botman is a doctoral candidate in Gender Studies at the University of Utrecht. Het PhD concerns current Dutch representations of mixed ethnic identity. In 2001 she co-edited a book, together with Nancy Jouwe and Gloria Wekker on the black and migrant women’s movement in the Netherlands, entitled ‘Caleidoscopische Visies’.

Prof. dr. S.E. Wieringa
Field of expertise: Sexuality
Short bio: Saskia Wieringa holds the chair of Gender and Women’s Same-sex Relations Crossculturally at the University of Amsterdam. She is also the Director of Aletta, Institute for Women’s History. She has done extensive research on gender relations, sexual politics and women’s same-sex relations in Indonesia and in other parts of the world, notably Japan and Southern Africa. She is co-founder and secretary of the Board of the Kartini Asia Network for women’s studies and advocacy. Her recent books include Sexual Politics in Indonesia (2002), Tommy Boys, Lesbian Men and Ancestral Wives (with Ruth Morgan, 2005), Engendering Human Security (with others, ed 2006), Travelling Heritages (ed, 2008). She is presently writing a book on heteronormativity in Asia among other projects.

Report on the selection process by the Dutch FRAGEN team

The long list of 23 texts comprised a balanced representation of different types of texts covering a range of different themes, and periods (from 1967-2001). Texts with a foreign origin that were suggested in the initial stage have been removed from the long list as the remit of the FRAGEN project is specifically national.

On the basis of everyone’s short-list nominations, six texts immediately emerged as the most frequently nominated texts; 1) Het Onbehagen bij de Vrouw, 2) De Schaamte Voorbij, 3) De Witte Toren van Vrouwenstudies, 4) Wel Feministisch, niet Geëmancipeerd 5) ‘Baas in Eigen Buik’ photograph and 6) Lesbisch zijn is politieke keuze. The other four texts which have now been included in the short-list have been chosen based on close consultation between the FRAGEN team and Saskia Wieringa, director of Aletta, Institute for Women’s History. Following that discussion, Socialisties-Feministiese Teksten (all issues) have been replaced by Te Elfder Ure, 20, 1, Feminisme as it was not possible to digitise all issues of a journal, while the Nel Draijer report has replaced the first year report ‘Blijf van mijn lijf’ Amsterdam.