Summary:
Reaction to the attempt of Christian Democratic Party in Slovakia to change the Constitution in 2001 so that it could be possible to pass the restrictive law in the case of abortions. The material consists of a short introduction, of two proclamations and reactions of people. It was published in Aspekt journal (2/2001) and later on also in the book “Possibility of choice.
Aspects of rights and responsibility” devoted to the problems of reproductive rights and possibility of choice.
Anti-abortion political activities had big response in public, Pro Choice organization was created and many organizations and many women (and also men) signed up proclamations against attempts for the restriction of reproductive rights. This activity was the most powerful activation of women in public sphere after the fall of the totalitarian regime. 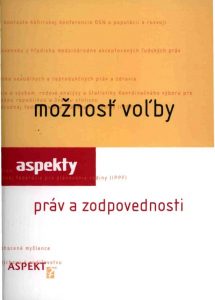 A period of full maturity and growth of the Romanian feminist movement and ideas. The increase in political activism and the multitude of theoretical positions were two of the criteria used for the selection of the texts.

Under the pseudonym of Joana, Anabela Cudell writes one of the first articles about lesbianism in Portugal.