Summary:
The interview with Eva Sopkova done by editor of ASPEKT Jana Cvikova was published at first in the issue of Aspekt journal focused on the topic of violence on women (3/1998). The issue was the peak of several years of efforts of ASPEKT and some other feminist and women´s NGOs to make the topic visible from the feminist perspective. Thanks to that the two national campaigns organized by NGOs were done under the title “The 5th Woman” (in 2000 and 2001). The interview with Eva Sopkova as one of the key materials on the topic was republished in the book “The 5th Woman”. The book, as well as the two journals focused on the topic (the other one – 1/1999) were the tools for women working in crisis centers and in all other organizations aimed at the help for abused women. Eva Sopkova is one of the first specialists (psychologist) who worked in the praxis from feminist perspective. She views the violence against women as the result of power asymmetry in a patriarchal ideological system. 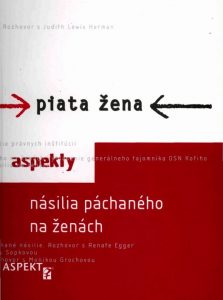 This is a song. It criticises the unequal status of women in society and different rights and duties offered by culture to women and men.

A collection of powerful stories recording different lives of women and documenting their experiences defining roles of women and the lack of women’s empowerment.

Information about frigidity, the drill for femininity, the myths of motherhood, the media fabrication of gender and the academic legitimation of oppression.