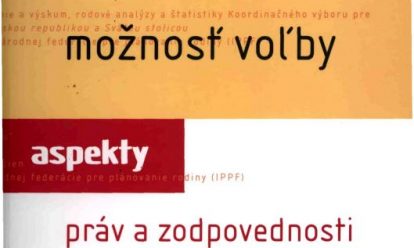 Summary:
The text of the Declaration was written as the response to the effort of Slovak Republic to ratify the Treaty with Holy Seat. The text of Treaty was in conflict with the legal system of the Slovak Republic as well as with international human rights conventions signed up by the Slovak republic. The Expert Group existed at that time (2000) as one of several groups working in the Coordination Committee for women which existed as an advisory body of the Government. It consisted of women experts for education and research both from NGOs, the academic sphere and from the administration sphere. The text was first published in the Aspekt journal 2/2001 and then re-published in the collection of texts “Moznost volby” (Pro Chioce). The material is introduced by a short reference to the article written by Jana Cvikova “What has cadar common with Vatican treaty” published in the same collection of texts.

The introduction by editor Callus examines the main factors that have influenced social change with regards to women’s role in society and gives an overview of the chapters.

The book is a merciless account of the author’s marriage to an alcoholic, who also was a prominent writer and artist.

Special attention is paid to gender inequalities in popular culture as well as homophobic language and practices in today’s tabloid culture.