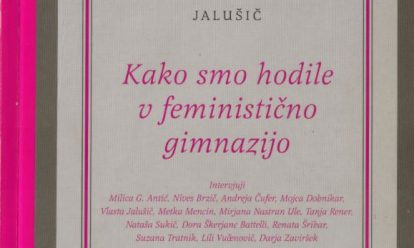 Summary:
The book is a reflexive and critical presentation of feminist groups, movements and activists in Slovenia from the 1980s till 1995, but also later. First part of the book consists of the exhaustive study “Contribution towards uncovering of the new feminism in Slovenia”, analysing a spectrum of events in the history of new feminism in Slovenia and Yugoslavia. “The new feminist movement emerged in the 1980s from following contexts: at one side resistance to one party regime and the paternalistic-socialistic handling with the so called women question; on the other side from the resistance against newly emerging ethno nationalisms in Yugoslavia after Tito`s death, since from the beginning of the eighties they distinctively instrumentalised questions of
fertility and abortion…” (Jalušič, p. 19). Second part of the book consists of interviews with 14 feminist activists: Milica G. Antić, Nives Brzič, Andreja Čufer, Mojca Dobnikar, Vlasta Jalušič, Metka Mencin, Mirjana Nastran Ule, Tanja Rener, Nataša Sukič, Dora Škerjanc Batelli, Renata Šribar, Suzana Tratnik, Lili Vučenović and Darja Zaviršek.

The text of the pamphlet alligns feminism with the radical left wing but also provides a critique of these leftist movements and their levels of engagement with women.

The article is a critical intervention into the feminist peace movement and feminist politics in general.