In the south of the Netherlands – the catholic part – this placard could be found hanging in the bus. The placard was prominently displayed next to the driver, along with the placards ‘First-Aid kit in the front’ and ‘Please do not talk to the driver’.

Furthermore, many volunteering women with special armbands would be posted at stations and boat docks to look for girls that might be in need of help or information (see photograph). 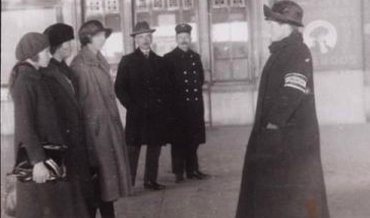 One of their main tasks was checking the addresses where the girls were heading to for reliability. If necessary, alternative accommodation was provided. The ultimate aim was to prevent girls – without distinction of nationality, religion, profession or class –  from falling into the wrong hands. It was called ‘Stationswerk’ (railway station work) and in 1902, the first post at Amsterdam Central Station was opened.

In 1943, this work was prohibited by the Germans because of the aid to Jewish refugees. The ‘railway station miss’ disappeared once and for all from the platforms. Above, two examples are shown of the work of the Federatie van R.K. Vereenigingen ter Bescherming van Meisjes in Nederland (Catholic union for the protection of girls in the Netherlands) and the protestant Dutch society for young girls Union.

At Atria, you will find hundreds of these kind of buttons. They were made to make demands and wishes visible.