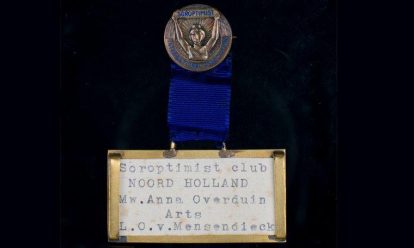 Anna Overduin (1877-1937) was a graduated medical doctor. She introduced the remedial therapy called Mensendieck in the Netherlands.
In 1913, she married Charles Jacobs, a nephew of Aletta Jacobs.

Overduin was also a so-called ‘Sor’, according to this badge. The Soroptimist movement was founded in the United States in 1921.
The name Soroptimist was coined from the Latin words ‘soror’ meaning sister, and ‘optima’ meaning best. The well-known Dutch feminist Welmoet Wijnaendts Francken-Dyserinck introduced the movement in the Netherlands in 1928.

Initially, improvement of the position of women was the central issue. However, during the 1960s, the focus of activities gradually shifted to general social issues and became more internationally orientated. As a rule, membership was restricted to one representative from every vocation or position per club and one could only become member through a personal invitation.

C.M.L. Pardede-baroness van Boetzelaer (1912-2011) was an important woman during the Second World War. In 1942, she was co-founder of the Bond van Nederlandsche Vrouwen in Groot-Brittannië (Union of Dutch Women in Great-Britain). From 1940 until 1944 she had been connected to the Ministry of Foreign Affairs, which had its seat in London at the time. […]