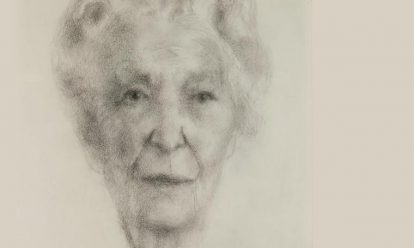 It was an extraordinary feat that, in 1932, she arranged to have built a women’s training center (Vrouwen Vormingscentrum De Born) at her own cost. The Born was built according to Bauhaus-ideals and was equipped with the newest domestic appliances. Working class women who were staying at ‘De Born’ felt free from domestic chores and bothers, to ensure they were given space to focus on their personal development. Ribbius Peletier herself gave various courses for reading club leaders and speakers.

This intimate portrait of Gonnie Scholten was drawn by the artist Rie Knipscheer in 1986. Gonnie Scholten was born on April 29th 1906 in Spankeren aan de IJssel and died on February 22nd 2005 in Doorn. In the 1920s, she studied theology in Leiden. In 1931, she married Willem Scholten and had six children. She worked as an assistant […]

There is a clear and significant difference between the propaganda resources which were created in the fight for women’s suffrage and those in, for example, the fight for the right on abortion during the so-called second feminist wave. This is clearly evident by comparing these brooches to a button with the text ‘Legalize abortion’! Atria has a silver applesauce […]