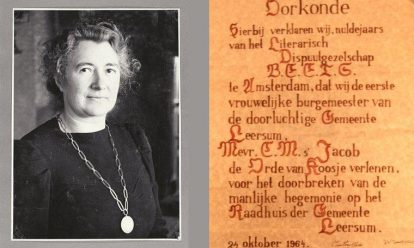 Truus Smulders-Beliën (above) is the first female mayor in The Netherlands. She was appointed in West-, Oost- and Middelbeers in 1946, and remained in office until her death in June 1966.

In the Fall of 1964 the number of female mayors increased to three, when Christina Maria s’Jacob-des Bouvrie (in Leersum) and Mia van der Wall-Duyvendak (in Geldermalsen) were appointed by the Crown. The ‘charter’ shown was presented to s’Jacob-des Bouvrie in honour of her appointment.

In 1924, the Lower House in the Netherlands still used pre-printed envelopes addressed to ‘Den Heere’ (‘Mr’), as shown in the picture above. However, as of 1918 there had been women in the Chambre as well. Dr. E.C. (Lizzy) van Dorp, LL M (1872-1945) was chosen for the liberal party Lijst Van Houten at the first parliamentary elections where […]

All Dutch women organizations assisted during the 1953 flooding. From a scrapbook, it becomes evident how much aid the Federatie voor Vrouwelijke Vrijwillige Hulpverlening (Federation for Female Voluntary Aid) offered at the time.

On 25 November 1935, the charter of foundation of the International Institute for Social History was signed. The IISH was founded by Prof Posthumus, husband of Willemijn Posthumus-van der Goot, one of the founders of the IAV. Both institutes started on the premises of Keizersgracht 264. The IISH made two rooms available for the sister […]