C.M.L. Pardede-baroness van Boetzelaer (1912-2011) was an important woman during the Second World War. In 1942, she was co-founder of the Bond van Nederlandsche Vrouwen in Groot-Brittannië (Union of Dutch Women in Great-Britain). From 1940 until 1944 she had been connected to the Ministry of Foreign Affairs, which had its seat in London at the time.

The years after the war she worked for the Royal Navy, also in London, until 1947. She was the first woman ever to be appointed officer in the Dutch armed forces. 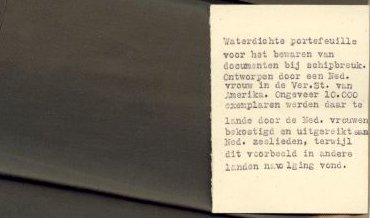 In the picture above you can see her standing – in uniform – making packages with wool for the Netherlands. At the exhibition ‘De Nederlandse Vrouw 1898-1948’ (Dutch Woman 1898-1948), held in the Hague in 1948, a section showed ‘Dutch Woman abroad during the Second World War’. Pictures and objects from the property of Corinne Pardede-baroness van Boetzelaer were shown there, among other things this watertight wallet.