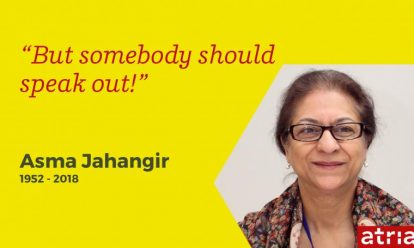 On february 11 Asma Jahangir, Pakistan’s leading social activist and advocate of human rights, passed away after a heart attack. She was 66 years old.

After receiving her law degree, Asma Jahangir collaborated with her sister to open Pakistan’s first law firm run by women in 1980. Her efforts as a lawyer for minorities, women, the poor and other groups oppressed by Pakistan’s regime brought her praise and criticism alike. During that same period, Zia ul-Haq, Pakistan’s dictator, introduced new laws that islamised Pakistan’s judicial system. Harsh penalties now awaited victims of rape and women caught in abusive marriages were legally stuck.

Jahangir attracted attention for her involvement in the high-profile case of a blind girl facing whiplashes and prison after being raped by multiple men. As the girl’s lawyer, Jahangir was threatened and arrested many times during the case – but in the end, she won.

Jahangir’s judicial efforts gained increasing support throughout her career – but Jahangir wanted to go one step further by democratising the law itself. “However flawed democracy is,” she told the New Yorker, “it is still the only answer.” She founded the independent Human Rights Commission of Pakistan, a milestone in the development of organised resistance against the military regime. She was also involved with Womens Action Forum, an organisation advocating equal rights for Pakistani women. From 2004 to 2010 she was the UN-ambassador of religious freedom. Jahangir travelled the world giving lectures and interviews. She was a regular guest in the Netherlands, receiving several Dutch awards – the Geuzenpenning in 2002 and the Four Freedom Award in 2002. In recent years, her presence on social media gained her a large online following as she engaged in sharp twitter debates with conservative institutes. All the while she was still present in Pakistan’s court rooms. “Ms. Jahangir often seemed to be everywhere at once,” the Washington Post wrote.

Jahangir knew her work was dangerous and controversial. Her perseverance in spite of these conditions was widely praised. She became a source of inspiration amongst women in strict islamic societies – and across the world.

But somebody should speak out! If I don’t do it, no one else will.

Jahangir refused to permanently leave her homeland, even though she faced many arrests and death threats. In an NRC interview (in Dutch) she was asked if she was afraid. “Absolutely”, she responded, exhaling the smoke of her cigarette. “I have often been threatened and I know that fear very well. But somebody should speak out! If I don’t do it, no one else will. So I will continue.”