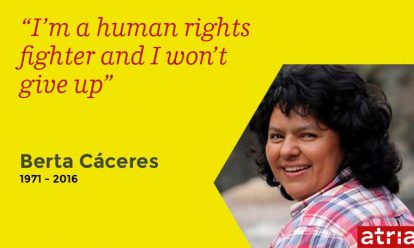 Human rights and environmental activist Berta Cáceres (1971-2016, Honduras) courageously dedicated her life to the struggle for human rights and particularly those of the indigenous people of Honduras. She co-founded the National Council of Popular and Indigenous Organizations of Honduras, and fought for not only its members’ rights but also improving their livelihoods. The Society for Justice and Peace granted her the Shalom Award in 2012, and she also received the Goldman Environmental Prize in 2016. Berta Cáceres was murdered on 3 March 2016.

Cáceres was a Lenca woman, who lived in a small community in one of the poorest and most isolated regions of Honduras. Her mother, a midwife and social activist, took in refugees from El Salvador. As a child, she was taught to stand up for disenfranchised people. Later she became a student activist and campaign leader of the National Council of Popular and Indigenous Organizations of Honduras (COPINH), which she also co-founded.

Cáceres had an extraordinary ability to convey the message that all peoples’ human rights deserve be protected, no matter what. Moreover, she was able to relate to women throughout the world and to appreciate the issues they encounter. Right from the beginning, she emphasised the importance of the LGBT struggle because she knew that lesbians and gays experience the same discrimination and oppression as her own people.

In 2006, Rio Blanco community members called on COPINH for assistance following the arrival of machinery and construction equipment. This was to be deployed for building the Agua Zarca Dam, which threatened to block local people’s access to water, food and medicine. Active resistance was organised in response and Cáceres was on the front lines from the very start.

Berta Cáceres was briefly forced into hiding in 2013 after at least three of her colleagues were murdered for opposing the Dam. By way of further intimidation, she was also charged with possession of an unlicensed gun and incitement. These criminal cases were finally dismissed in 2014. In 2015, she was awarded the Goldman Environmental Prize for her campaign “that successfully pressured the world’s largest dam builder to pull out of the Agua Zarca Dam”.

A black day for human and environmental rights

On 3 March 2016, unidentified gunmen entered Berta Cáceres’ home in La Esperanza and shot her dead. They have never been arrested.

Although Cáceres had long lived in fear for her life, her murder shocked her many supporters both in Honduras and around the world. Naomi Klein, the Canadian author and environmental campaigner, tweeted:

“Devastating news. Berta was a critical leader and fierce land defender. Part of a global wave of such attacks.”

A few days later, Phumzile Mlambo, the Executive Director of UN Women, honoured Cáceres at the New York opening of the Commission on the Status of Women. Cáceres’ daughter Isabel Zúñiga arrived later that week and gave a speech. Atria’s Antia Wiersma was in the audience and was deeply impressed: “She spoke about her mother and her fight in such an eloquent and dignified way that she moved the entire auditorium to tears.” Zúñiga paid tribute to Cáceres by saying: “She was a woman defender of life in the most holistic sense. She was killed because of her struggle for human rights, for nature. When you defend life, you win enemies. When you dream of a just world, as Berta did, it is often considered a crime. The government did not protect Berta Cáceres’ life, as it did not protect other women’s lives, who have been killed. It is not enough to punish the killers. We need to know who is behind this. Who is the intellectual perpetrator?” She concluded her speech by urging human rights fighters to find ways that “change a culture of death into a culture of life”.

With Berta Cáceres’ passing, the world has lost a courageous woman. Her legacy must live on and continue to inspire her children, the countless women and men who fought alongside her and the world at large.

Unforgettable Women
In its Unforgettable Women feature, Atria highlights women who have recently died and whose lives were dedicated to the fight for human rights and gender equality. Some of these women were murdered for their beliefs. As the Dutch Institute on Gender Equality and Women’s History, Atria wishes to remember and honour them.