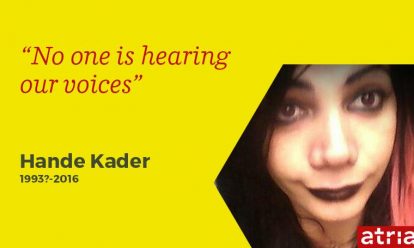 On 12 August, the young Turkish transgender activist Hande Kader was found murdered in Zekeriyaköy, a suburb of Istanbul. She had been raped and set on fire. The ferocity of her death caused a storm of protest and a call for more effective prevention and tackling of violence against LGBTI people.

On the front line

Hande Kader campaigned for the rights of the LGBTI community in Turkey. She was frequently at the forefront of demonstrations underscoring the high number of trans murders in Turkey, which go unpunished. In 2015, the police blasted her with water cannons during Istanbul’s Gay Pride, an annual event it had banned because participants’ safety could not be guaranteed. So when the police attempted to disperse the parade, Hande Kader sat down in protest. This action transformed her into the figurehead of the Turkish LGBTI community. What’s more, she had a message for not only the Turkish government but also the Turkish media at Pride:

“You take pictures but you do not publish them. No-one is hearing our voices.”

Little is known about Hande Kader’s life. Just like many other Turkish transgenders, she worked as a prostitute; finding a regular job can be difficult because many transgenders face discrimination and social exclusion. Moreover, the process to change gender legally is both complicated and expensive. It also entails mandatory genital surgery and sterilisation. Hence, many transgender prostitutes work on the streets rather than in brothels, which are safer but require an ID card stating the “right” gender.

Since 2008, forty-three transgenders have been murdered in Turkey; during this same period there were 2,115 victims globally (Transgender Europe, 2016). The Turkish government has done little to counter the violence against transgenders, and many trans murders are consigned to relative anonymity. But a cautious turnabout seems to be underway since Hande Kader’s death. Her murder has led to a great deal of protest and not only from LGBTI communities. Turkish Gay Pride issued a statement: “We feel great anger. Our friend has been murdered. Turkey has a higher rate of trans murders than anywhere else in Europe. We want justice for all those who lost their lives simply because they were gay or transgender.” A large protest demonstration was also held in Istanbul, which was attended by women’s organisations, LGBTI associations and political parties.

These protests were not confined to Turkey. Actions also took place in Bern and Berlin, and the Dutch TransAmsterdam Foundation held a memorial event in Amsterdam. There are still calls for justice on the social media through the #HandeKaderSesVer Twitter hashtag. “Ses ver’ means to “speak out” or “give voice” in Turkish.

Hande Kader stood up to the violence against LGBTI people with conviction and supreme valour. Through Unforgettable Women we honour her and we give her a voice.

Unforgettable Women
In its Unforgettable Women feature, Atria honours exceptional women, who have recently died and had dedicated themselves to human rights and/or women’s rights. Some of these women rarely reach the news. But, through their courage, they are “unforgettably” inspiring by, for instance, risking their lives so as to fight for their rights. As a knowledge institute on emancipation and women’s history, Atria assigns these women a place of honour so that they will not be forgotten.