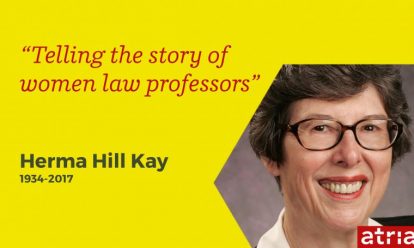 On June 10 2017 the American Law Professor Herma Hill Kay passed away. She was 82 years old. Kay was a pioneer in groundbreaking legislation and academic publications concerning the legal position of women. She was also a role model, a trailblazer and a coach for countless female students and legal professionals.

Herma Hill grew up in rural South Carolina (Orangeburg). Her mother was a primary school teacher and her father was an army chaplain. Her sixth grade teacher prompted her to consider a future in law. After the young Kay had presented a scintillating plea during a classroom debate about the American Civil War, he told her: “If you were my daughter, I would send you to law school.” Her mother wouldn’t hear of it and assured her: “Women can’t make a living in law.” Kay studied English at the Southern Methodist University in Dallas, Texas, where she became a stellar student and graduated magna cum laude in 1956. Subsequently she attended the University of Chicago Law School, where she obtained her Juris Doctor degree in 1959. For a short while hereafter she worked as a clerk at the California Supreme Court. In 1960 she became the second-only woman to join the law faculty at Berkeley, where she would work for the next 57 years. In her scarce leisure time Kay became a talented pilot and she also enjoyed touring in her yellow Jaguar.

In the late 1960s she served on the California Governor’s Commission on the Family which dealt with a controversial proposal for legislation to introduce the so-called ‘no-fault divorce’. This made it possible to file for divorce without the necessity of proving culpable action. This groundbreaking 1969 law was eventually adopted by many other American states, the last one being New York in 2010.

Equality of the sexes and diversity

Kay worked to improve the position of women in other ways too, both within and beyond the law faculty. For example she wrote and co-wrote books about sex discrimination, family law, diversity in law schools and conflict of laws. In this way she literally changed the legal landscape in the field of US family law. Melissa Murray, Interim Dean of the UC Berkeley School of Law, put it as follows:

In the late 1960s and 1970s, as a revolution in substantive sex equality was sweeping California, Herma was at its center.

In 1992 Herma Hill Kay became the first female dean at Berkeley which also made her the first female dean at any of the top ten US universities. Under her leadership the number of women students rose from ‘a handful’ to over 50%, despite shrinking budgets and a 1996 prohibition on preferential policies. Kay always remained a passionate advocate for the participation of women, as a role model and as a mentor. During her time at Berkeley she influenced the lives of many female students and young lawyers. For example, it was on her recommendation that the Boalt Hall Women’s Association was founded, which had as its objective to improve the position of female law students at Berkeley. In addition, in 1974 three of her students established the Equal Rights Advocate in 1974, a non-governmental organization that works to improve the (legal) position of women. Kay served in many other important positions beside her position as professor and dean. Positions, for instance, like president of the American Association of Law Schools (AALS) and council member of the American Law Institute (ALI). She was also made honorary member of the Family Violence Appellate Project (FVAP), an organization providing free legal assistance to victims of domestic violence and their children.

Kay received numerous awards for her legal work. In 1985 she was the first recipient of the Barbara Nachtrieb Armstrong Award, named after the first woman to study law at Berkeley in 1915. In 1992 she was awarded the Margaret Brent Award to Women Lawyers of Distinction and in 2003 the Boalt Hall Alumni Association Faculty Lifetime Achievement Award.

Women in the spotlight

When she died, Kay had almost finished writing a book about American female lawyers in high positions, a project she had been working on for years. She focused especially on the fourteen female law professors who had preceded her. In addition she focused much of her attention on women of colour, lesbian women, women deans and judges. Hopefully the book will be published posthumously so that all the female pioneers and role models will be given the exposure they deserve, just like the author.