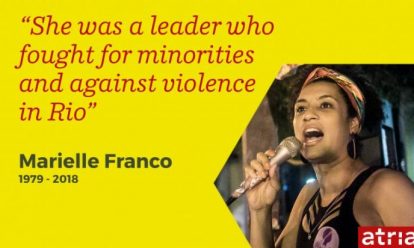 On Wednesday March 14, 2018, Marielle Franco, Brazilian politician and board member in Rio, was shot down by two unknown men at the age of 38, after an activist meeting. The murder, seen by many as a political settlement, led to large-scale demonstrations.

Franco was a controversial figure in Brazilian politics. As a municipal councilor in Rio de Janeiro for the socialist party PSOL, she was an outspoken feminist and human rights activist. She resisted the actions of the Military Police in the slums of Rio. In order to combat the major influence of local drug gangs, President Tremer had the police intervene in these neighborhoods in February. Since then, the interventions have garnered a lot of criticism because of the excessive use of violence against – mainly black – residents and a deterioration of the general safety.

Marielle Franco grew up between the violence of these favelas. At the age of 19, she got a daughter, which she raised on her own. She worked for a minimum wage as a teacher and started a social sciences study at the same time. When a friend was killed by a lost bullet in the year 2000, Franco has since committed herself to human rights. Her own experiences in the favelas were always her main motivation. “I have experienced in practice what it’s like to sleep and wake up with tank noise,” she says in an interview with Combate Racismo Ambiental. She criticizes the course of events during the interventions.

The military intervention is a farce […] Poor preparation, rape and violence were the order of the day.

The only black women in the council

In 2007 she ended up in socialistic Partido Socialismo e Liberdade through her work at various social organizations. When she became a candidate in the municipal elections in 2016, she received a lot of support from blacks, women and LGBT people. She was elected and was the fifth most popular candidate. She was one of six women in the board of 51 persons. In addition, she was the only black woman on the board. This while half of Rio’s population is black.

During her term, Franco focused mainly on laws and measures against gender violence, improvement of LGBT rights (she herself was bisexual) and enforcement of the rights of favela residents. She was also in the Women’s Defense Commission and was one of four members in a committee that supervised police operations in the favelas. On the night of her death, she spoke at a meeting for black women about discrimination and inequality in Brazil. She also sent a tweet in response to the death of the young citizen Matheus Melo, who was hit by a lost police bird when he left a church. Melo’s death fits in a long line of innocent victims of police violence.

Yet European media hardly wrote about Franco. The results of Google Search do not show any Dutch documents containing her name until March the 13th. Also English-language listings of Franco are almost nowhere to be found. Only after the murder of March the 14th, her name suddenly appears in large North American and European newspapers. The Intercept, an award-winning Portuguese-American magazine, warns against a ‘whitewashing’ of Franco’s ideas. Like Martin Luther King, the magazine states, Franco was portrayed as an icon a day after her death in various media. However, the radical charge of her message was simultaneously ‘cleaned up’ and appropriated by the groups on which Franco criticized. Franco’s sister, Anielle Silva, joins in and criticizes the fact that Franco receives so much media attention, while the victims of violence in the favelas – the group she stood up for – remain underexposed.

Silva speaks. “All I want is for her legacy to be respected.” Franco clearly expressed this key message in a tweet on June 12th, 2017. “I dedicate the day to black, lesbian, bisexual, trans, fat, single mothers, prostitutes and all women who have felt rejected and invisible.”

In its Unforgettable Women feature, Atria honours exceptional women, who have recently died and had dedicated themselves to human rights and/or women’s rights. Some of these women rarely reach the news. But, through their courage, they are “unforgettably” inspiring by, for instance, risking their lives so as to fight for their rights. As a knowledge institute on emancipation and women’s history, Atria assigns these women a place of honour so that they will not be forgotten.