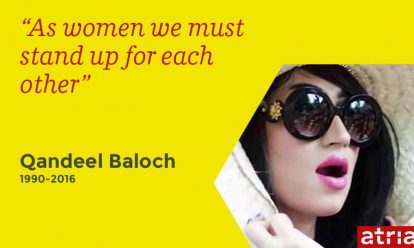 The Pakistani social media personality Qandeel Baloch (real name Fauzia Azeem) fought for women’s rights and the right to self-expression. She had fans all over the world. But her challenging style was not always appreciated, and she was strongly criticised by the conservative and patriarchal sectors of Pakistani society. In addition, there were regular threats that she had to stop being so provocative. On Saturday, 16 July 2016, she was slain by her brother. He called it an honour killing. We call it murder.

Baloch grew up in a poor, conservative family in Lahore, Pakistan, together with eleven other children. She studied at the Punjab University of Lahore, where she specialised in various languages. She was married off at a young age and gave birth to a son. When her son was eighteen months old, she left the family because of domestic violence.

The multi-talented Qandeel Baloch then became a model, singer, actress and social media personality. She was both admired and reviled. Her sexy appearance earned her the nickname “the Pakistani Kim Kardashian”. But this comparison was not entirely accurate. Baloch also had something to say, a message that she consciously chose to broach through, for instance, semi-naked photos. She regularly denounced women’s restricted role in Pakistan’s patriarchal society and showed how religious conservatism and a double standard go hand in hand. During Ramadan, she posted a selfie on Facebook of herself with a prominent cleric. According to Baloch, they were smoking cigarettes and having a drink; according to the cleric, they were discussing religious matters.

Baloch’s audacious actions met with resistance and not only from conservative Islamists. She sought out the boundaries of socially acceptable behaviour and was regularly threatened, even by her brother. This was because she would damage the family’s honour. One of her last interviews was about honour:

“How can I threaten anyone’s honour when I have been told repeatedly that I have no honour?”

Ultimately, when ugly threats turned into death threats, Baloch asked for police protection. But the police did nothing. While her parents were sleeping upstairs in the family home, her brother drugged her and then strangled her.

The question now is whether Qandeel Baloch’s murderer will ever pay for his deed. This is because the Islamic Sharia law of Diyat includes a so-called forgiveness clause where perpetrators of honour killings, who are related to the victim, can avoid punishment either by seeking forgiveness from the family or by reaching a financial settlement. This clause is almost always invoked because honour killings frequently involve family issues.

Unfortunately, Baloch’s murder is not an isolated incident. In Pakistan, there were 860 cases of honour killings between January 2012 and September 2015 (Human Rights Commission of Pakistan, 2016). Worldwide, there are between 5,000 and 12,000 female victims each year (UN Population Fund, 2015). Meanwhile, every attempt to eliminate the forgiveness clause from Pakistan’s legislation has failed. In 2015, thirty religious groups protested against the federally proposed Anti-Honour Killing Laws and threatened to bring down the democratically elected government. Their protest was effective and the bill has once again been brushed aside.

Qandeel Baloch fought for the recognition of women’s fundamental human rights. Many mourn her death and are emphasising that this murder reveals the sexism and misogyny that must be endured by women in Pakistan. However, there are others who defend the brother or claim that “she had it coming”. In addition, the finger of blame is being pointed at the media for magnifying Baloch’s life and exposing her to danger.

Hopefully, the protests against this murder will create an impetus to change the law so that honour killings in Pakistan will no longer go unpunished. Hopefully, they will also contribute to an awareness of the gravity of this problem. And what is certainly already hopeful is the announcement that the Pakistani parliament will be voting in August on new legislation to impose mandatory prison sentences on the perpetrators of honour killings.

Sadly, violence against women, who stand up for their rights, is not just an individual or a Pakistani problem. The reports of the UN Special Rapporteur on Violence Against Women assert that, globally, it has assumed epidemic proportions. It is also a violation of universal human rights. Qandeel Baloch deserves to be remembered as one of the many courageous women, who demanded their rights and fought with great strength against the fetters imposed upon them.

Unforgettable Women
In its Unforgettable Women feature, Atria honours exceptional women, who have recently died and had dedicated themselves to human rights and/or women’s rights. Some of these women rarely reach the news. But, through their courage, they are “unforgettably” inspiring by, for instance, taking great risks so as to fight for their rights. As a knowledge institute on emancipation and women’s history, Atria assigns these women a place of honour so that they will not be forgotten.
By: atria
Share: