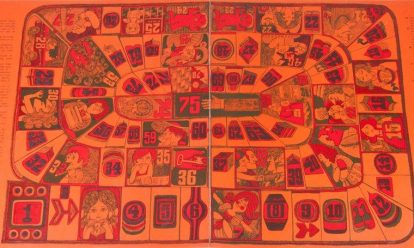 The national initiative ‘Op de vrouw af’ (Straightforward/Point-blank*) aimed at raising awareness among women about their limited social possibilities. Action groups such as Dolle Mina (Mad Mina) and Man Vrouw Maatschappij (Man Woman Society), but also radio, television and traditional women’s magazines united themselves to draw attention to the importance of paid labor for women, the lack of good part-time jobs, the position of unmarried and single mothers and other aspects of women’s lives.

In MVM-groups these issues were discussed, using this specifically designed traditional board game as a starting point. One of the outcomes was that even regular goose-board groups became discussions groups. The political goose-board game had an existence outside of the action groups as well: it was printed in several magazines. And even more recently, in 2008, Aletta (now Atria), institute for women’s history, had a teaching module created based on this goose board.

* in Dutch, the saying is gendered

At Atria, you will find hundreds of these kind of buttons. Besides banners and posters, during the so-called second feminist wave – in the 1970s and 1980s – especially buttons were made to make demands and wishes visible. The texts on the buttons are generally short and powerful, but also often funny such as ‘more sun, less […]