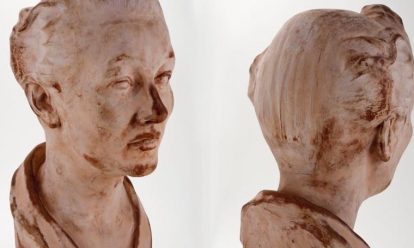 In 1930, Willemijn Posthumus-van der Goot (1897-1989) was the first female economist in the Netherlands who obtained her doctoral degree.
A few years later, in 1935, she was one of three founders of the International Archives for the Women’s Movement (since 2013 named Atria).

Rosa Manus and Mia Boissevain took the initiative for the exhibition ‘Woman 1813-1913’ that took place at the country estate ‘Meerhuyzen’ in the current Amstelveen. For the organization of the exhibition, they established de Vereeniging Tentoonstelling ‘De Vrouw 1813-1913’ on the 22nd of May 1912. They had less than a year to organize the exhibition. […]

There is a clear and significant difference between the propaganda resources which were created in the fight for women’s suffrage and those in, for example, the fight for the right on abortion during the so-called second feminist wave. This is clearly evident by comparing these brooches to a button with the text ‘Legalize abortion’! Atria has a silver applesauce […]

This poster with seventeen professions in which women were not employed, or only very rarely, was shown on the Nationale Tentoonstelling van Vrouwenarbeid (National Exhibition of Women’s Labor) which was held in The Hague in 1898. Around the year 1900, women’s labor had a low standing in all social classes. Paid work was even taboo for […]