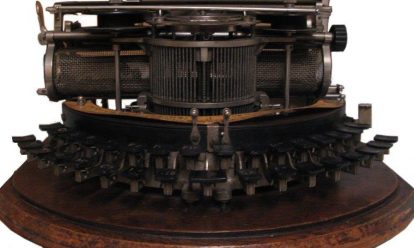 This Hammond typewriter belonged to the historian and feminist Johanna Naber (1859-1941). Historians characterize this typewriter as ‘Nabers companion in the woman question’.

It is likely that she bought this Hammond in 1904, with the money she received for her rewarded work ‘Geschiedenis van Nederland tijdens de inlijving bij Frankrijk’ (History of the Netherlands during the French occupation) of the Teyler’s Tweede Genootschap, a scientific society. Naber typed many of her articles, books, convocations, leaflets, pamphlets and protests on this exact typewriter.

Initially, she had her archive bequeathed to the International Archives for the Women’s Movement (she had been one of the founders in 1935). But when she learned of IAV’s closure and the seizure of all materials in the summer of 1940 by the German occupiers, she changed her will. Thanks to mediation of Maria Grever, her archive was still donated to the IIAV (now Atria) in 1994.

This poster with seventeen professions in which women were not employed, or only very rarely, was shown on the Nationale Tentoonstelling van Vrouwenarbeid (National Exhibition of Women’s Labor) which was held in The Hague in 1898. Around the year 1900, women’s labor had a low standing in all social classes. Paid work was even taboo for […]