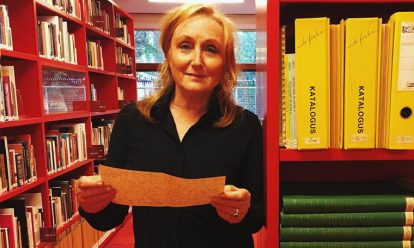 Atria’s collection contains many books and unique pearls from the women’s movement: from ‘Boss of your own Belly’ badges, women’s suffrage banners from the ‘first feminist wave’, to the Kenau Foundation archive, the organisation that developed a self-defence course for black women in the nineties. Journalist, author and programme maker Djoeke Veeninga is no stranger to Atria. For the 1980’s feminist radio programme ‘Hoor Haar’ (Hear Her) by the VARA, she made regular use of Atria’s archive. She now works on a five-episode series for Dutch television about the journey of Aletta Jacobs with director and camera operator Marlou van den Berge. In 1911, Aletta travelled the world for over a year to stimulate the fight for women’s voting rights and to gain insight into the situation of women. The archive of the Netherlands’ most well-known and prominent feminist has recently been acknowledged as UNESCO heritage and included in UNESCO Memory of the World

For the F-piece, Djoeke Veeninga chooses the American article Keeping the Stork in its Place and the letters that Aletta Jacobs received following the publishing of the article. The article from 1920 describes how Aletta Jacobs, as a doctor, advised women on birth control, a revolutionary step in the early 20th century.

Aletta’s archive at Atria is enormous. What makes these particular papers so unique in your view?

Now that Marlou van den Berge and I are working on a television series about Aletta’s journey around the world, we are looking at many different topics. I particularly became interested in the birth control issue: how did she advocate this and how did it impact her own life? This is one of the subjects that we explore in the series. This article appeared in an American women’s magazine in 1920 and describes the Netherlands as a kind of utopia: somewhere, in a faraway, small kingdom where they don’t have their own raw materials or resources, people are overjoyed to have such amazing birth politics. Every baby the stork brings is a wanted one, and all thanks to doctor Aletta Jacobs.
This is, of course, slightly exaggerated, but the situation in America regarding birth politics was at the time considerably more grim than it was here. There, information about birth control was not even allowed. There was a law banning it. At her surgeon’s practice in Amsterdam, Aletta Jacobs was visited by many poor women and saw that they experienced considerable problems as a result of physical ailments due to the many pregnancies they had to endure. As a doctor she felt it was not good for the public health if women had to have so many children. She believed it would be good to provide women with a means to limit these pregnancies. The article in the American women’s magazine was used to boost the political discussion about this important issue in the USA. There was a strong need for this among American women.

Many people know Aletta Jacobs in particular from the fight for voting rights. What did she do for birth control?

Aletta Jacobs saw the medical and social consequences of all those pregnancies. The poverty, the way in which they prevented women from participating in society. The pessary (first contraceptive, ed.) originally came from Germany. Aletta was the first in the Netherlands to introduce it to her patients. This was truly pioneering work and did not yet exist at that time. She first tried it on a few patients and saw that it had no harmful effects. Only then did she start to officially prescribe it.

No, that’s a different case. Aletta Jacobs didn’t see the fight for birth control as a feminist action point, at least not publicly. Her feminist agenda was: women must get political rights, be free to follow education and they must be able to develop in society. For this development, they obviously could not be eternally confined in their homes while being pregnant. She named the medical and social dangers as an argument to call for birth control. What she did do – which was also very progressive – is discuss women’s ability to feel lust. She also wrote a book about the female body [in the possession of Atria, ed.], in which she explicitly explains where the clitoris is located, and that the clitoris is the place a women’s feelings of lust stem from. It was fantastic, that she acknowledged this. She believed that women should be allowed lust without immediately becoming pregnant.

What was in the letters she received following the article?

This is what is so distressing: they are heartfelt cries. This for example, from Mrs. Fleetwood Millar. She says that she has three children, she has had two miscarriages and has suffered from blood poisoning twice. Now her husband is seriously ill, and she must provide for three children with sewing work, the only skill she has to support them. She says that she’s afraid of having more children, and if Aletta Jacobs could please tell her what she tells the women in the Netherlands. A desperate story. And then there’s this woman, who has nine children! Every time she’s pregnant, she writes, she’s so sick that she is forced to crawl when going up the stairs and can only slide back down. You feel the desperation of these American women, who then send their scribbled cry for help to a virtually unknown doctor on the other side of the world in an envelope addressed only to Dr Aletta Jacobs, Amsterdam, the Netherlands. And yet all those letters reached her, since she was so famous. Unfortunately, we do not know whether she was able to help those women.