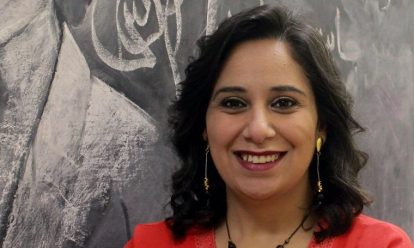 The Egyptian feminist and human rights campaigner Mozn Hassan (1979) has won the 2016 Right Livelihood Award, which is also known as the Alternative Nobel Prize. She was chosen not only personally but together with Nazra for Feminist Studies, the organisation she founded and of which she is also the director. Hassan and Nazra were commended for their commitment in difficult circumstances to equal rights for women.

The German-Swedish philanthropist Carl Wolmar Jakob, Baron von Uexküll, launched the Swedish Right Livelihood Award in 1980. He felt that the Nobel Prizes were too narrow in scope and primarily recognised people from industrialised countries. The Right Livelihood Award comprises €200,000 and is presented annually to people and organisations who work on resolving social problems in an impressive way. Hassan and Nazra were granted the Award for contributing to the fight against sexual violence against women, supporting the victims of sexual violence and encouraging young feminists and female human rights activists. In her speech, Hassan dedicated the Award to “every woman who struggles to get basic rights, for every woman who fought and survived sexual violence and for all women who are fighting everyday for their right to exist”.

A feminist through and through

Mozn Hassan grew up in Saudi Arabia and came to Egypt in the 1990s. Her parents moved in academic and political circles, and there was also a great deal of discussion at home. Hassan was educated at various universities in Egypt. After graduating in Graeco-Roman Studies, she then opted for Civil Society and Human Rights. In 2005, she gained her Master’s in International Human Rights Law at the American University in Cairo; her thesis was on divorce, polygamy and the Egyptian feminist movement. In addition, at a young age, she was active in the women’s movement and various Non-Governmental Organisations (NGOs) in Egypt. As a legal researcher for the American University in Cairo, she was also responsible for projects on Sharia and Human Rights in MENA countries (the Middle East and North Africa). Currently, she works as a trainer and researcher on women’s rights issues. Hassan is also a board member of the Global Fund for Women, which granted her the Charlotte Bunch Human Rights Defender Award in 2013.

On 27 June 2016, Hassan intended to fly from Cairo to Beirut so as to participate in a conference of the Women Human Rights Defenders (WHRD). But at the airport she discovered that she had been issued with a travel ban. This was connected with the NGO Foreign Funding Case, also known as Case No. 173. In July 2011, the Egyptian government had launched an investigation into NGOs; this resulted in a 2012 report by the security forces that covers every single Egyptian NGO. On the basis of this report, NGO members can be arrested for, for instance, having contact with a foreign organisation without the Egyptian government’s permission. The rules are vague here, but provide the government with enough space to round up human rights activists and women’s rights activists. It then either fines them or imposes a prison sentence. Those banned from leaving the country are frequently only notified once they arrive at the airport. In Hassan’s case, she had already been in court and was now compelled to return for the third time. Legal proceedings are also underway against Nazra, a fate that currently affects many human rights organisations and NGOs in Egypt.

Nazra for Feminist Studies was founded in 2007. During the Egyptian revolution of 2011, the organisation documented human rights violations. It also co-ordinated responses to the alarming number of cases of sexual violence against women, who participated in the protests. Medical, psychological and legal support was arranged for the victims. Moreover, Nazra was active in various coalitions of women’s organisations, which successfully lobbied for the inclusion of women’s rights in the new constitution of 2014. “Sexual harassment” has now become a part of the Egyptian penal code. In addition, Nazra encourages the more effective political and social participation of women by, for example, holding mentoring projects. It also organises an annual Feminist School, where both young women and men are given an introduction to gender issues.

One of the conclusions of the 57th session of the UN Commission on the Status of Women (4-15 March 2013) was that NGOs active in the fight against violence against women should be “recognised, encouraged and supported” through, for instance, international co-operation. This call contradicts everything that the Egyptian government does. Despite intense opposition, the women’s organisations and NGOs endeavour to continue their work. International NGOs and networks are important here, as Mozn Hassan had said herself during an interview on Vital Voices. But it’s not only about funding and money. Women in Egypt want to work with real partners. For Egypt is now in a transitional phase, and this is why networking is so important. International and national NGOs recognise this, and are currently supporting Nazra and Mozn Hassan through films and petitions on the internet.