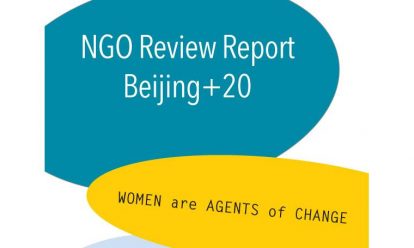 What are the results of the Dutch gender equality and women’s rights policies 20 years after the Fourth World Conference on Women in Beijing? A wide variety of Dutch civil society organisations describe its contributions to the implementation of the Beijing Platform for Action (BPfA) as well as the Dutch government’s policy and implementation. Atria, WO=MEN and the Dutch Women’s Council (NVR) coordinated the Review report.

The civil society organisations sent the Review Report to UN Women (United Nations Entity for Gender Equality and the Empowerment of Women).
On Tuesday 17 February 2015, representatives of Dutch civil society offered a set of recommendations to Minister Bussemaker of Education, Culture and Science. She will be head of the Dutch delegation during the upcoming 59th session of the UN Commission on the Status of Women in New York next month.

As a proper legal framework is in place in most countries, the emphasis of the recommendations is on the implementation of the Beijing Platform for Action. Adequate funding and the establishment of proper accountability mechanisms are two crucial prerequisites. Furthermore, the document highlights a number of urgent themes that require special attention, i.a. violence against women and sexual and reproductive health and rights. The Minister expressed her gratitude for the input from civil society and her intention to integrate the concerns, where possible, into the Dutch contribution during CSW59.

Commission on the Status of Women

The Commission on the Status of Women (CSW) is the UN body that deals with women’s rights and gender equality. Members of the CSW gather annually in New York and represent 45 Member States of the UN. Membership rotates every four years. The current Dutch membership ends in 2015. This year marks the 20th anniversary of the 1995 Fourth World Conference on Women in Beijing, which will be celebrated world wide. Central theme of CSW59 will therefore be the post-2015 agenda: where do we stand 20 years after Beijing and how do we proceed from here?

CSW59 will take place from 9 until 20 March 2015 in New York. Antia Wiersma and Catherine Bij de Vaate will be present on behalf of Atria and keep you posted.

The result of the international debate which approached questions as: How can ‘Europe’ ensure greater gender equality? And what influence can citizens exert on these matters?