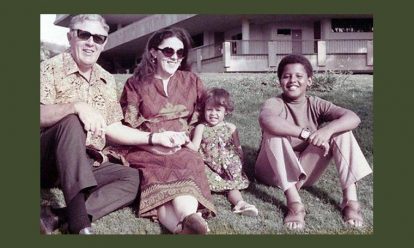 Thinking of Ann Dunham I see her black sparkling eyes, her generous smile and the big table on which a wide variety of Indonesian and international dishes was spread out. We, her friends, have gathered around her large table for one of our frequent dinners at her house. The ‘we’ are a gang of Indonesian and international gender experts and PhD students, back in Jakarta on our way to or from the field, where Ann herself frequently was to be found.

Her ‘field’, as was mine, was Java. The time was the early 1980s at the height of the repressive Suharto regime. Ann was the one with the great cook, the spacious house and the indomitable belief that if you just started working for the poor women of Indonesia, the poor peasants, the ‘small people’ , wong cilik in Indonesian, you might make a difference. In her dining room we often gathered, commenting on the delicious food, recounting the stories of our travels. But it was not all light banter, for to be working on behalf Indonesia’s miserable and powerless poor was dangerous at the time.

The 1980s was a dark episode in Indonesia. The ‘smiling general’ Suharto ruled with an iron hand. He had come to power by having more than a million people massacred, a genocide which to date has been completely ignored internationally. The mass murder was sparked off by the spreading of ludicrous lies that young girls had castrated and killed some corrupt generals who were abducted by younger, progressive officers. The powerful communist party was blamed for the abduction, the young girls were associated with the progressive women’s organization. The military helped by Muslim youth gangs went on a killing spree. They wiped out the party, its mass organizations and any other supporters of then president Sukarno. This had all happened some fifteen years ago and since then an unrelenting campaign against any form of progressive thought had rendered people with compassion for the poor as potentially suspect.

So was Ann a ‘fellow traveller’ as some commentators suggest? No, none of us were – we were all very critical of the ideology and strategy of the communist party. But we were all deeply struck by the misery of Indonesia’s poor and the plight of its women and in our different ways tried to bring about the social justice than is enshrined in Indonesia’s foundational document, the Pancasila.

The best way, most of us felt, was through helping the poor to help themselves. Both Ann and I were very enthusiastic about a micro credit scheme that a charismatic woman in Malang, Ibu Zaafril, was experimenting with. Women would get together in small groups, discuss their needs and the scope of their possibilities and would then file for a loan together. If one failed, the others were co-responsible, and so would make sure the wobbly enterprise would get back on track. Inspired by Gandhian ideas Ibu Zaafril also managed to instill ideas of justice, sharing and cooperation into the groups.
Ann, through her job with the Ford Foundation that she held at the time, could expand on a scheme like this and helped small artisans set up their businesses with small loans. Micro-credit is a buzzword now, especially as it transpires that Princess Maxima is an enthusiastic supporter of this method of helping the poor to help themselves. But in the early 1980s in Indonesia working with the poor was regarded with suspicion by the ubiquitous intelligence services.

With desert husbands, lovers and children became the topic of our discussions. Ann used to regale with great pleasure the birth of daughter Maya. She had kicked the attending nurse unconscious when she hit the door of the tiny cubicle in the hospital where she was giving birth with a powerful thrust of her mighty left leg. The door slammed in the face of the approaching girl who wanted to peep in on this white woman giving birth in an Indonesian hospital. For that too was Ann – she had refused to go to Singapore, Bangkok or back to the US, as most expat women had decided was the wiser course to take, after having noticed the unhygienic conditions and the poor service in Indonesian hospitals.

Empathy, solidarity and hard work to end misery and injustice those were the traits that characterised Ann most. And for her that didn’t stop at her desk. These values were natural to her and were integrated in her whole life. She didn’t speak much of her son’s father, but used to joke that she hadn’t been happy in having her men stay around her. Was she naive, she sometimes mused? Fact is, she couldn’t accept that people might change their values if a career and money came their way, as happened with Maya’s father, Lolo Soetoro. She had fought against racism in her own country, she rebelled at the misery she saw around her in Indonesia. And she took concrete steps to fight against this injustice both in her own life and in her work. To be effective, she realised, she first had to understand what were the conditions under which people lived and worked, what were their values, their histories. Her research on blacksmithing in Java is a landmark study in its depth and comprehensiveness. She needed meticulous field research, she said because the grand theories of the days, particularly of modernization didn’t convince her.

A loving mother to Maya, she missed her son. But she respected his wish to stay with her parents. He had attended primary school in Menteng, the old colonial neighbourhood where expats and middle class Indonesians used to live in the 1980s and had not been happy there. A statue of a young Afro American boy now is placed near that school and his former classmates boast of their friendship with the present President of the US. But back then Barry was a black boy, standing out in a culture where a light skin was still associated with superiority. For porcelain-skinned Ann, who had fought against racism all her life and who dearly loved the Indonesian people this was difficult to accept.

She was a warm friend; her strength and optimism always remained with me when I came to my lodgings after such a dinner. In fact till this day I miss Ann when I am in Jakarta. As I was blacklisted after my own research I couldn’t go back to Indonesia after the mid-1980s. The shock of her early death from cancer was great. Somehow I had always harboured the expectation that when I would be able to return to Jakarta we would resume our dinners.

Is there a common culture of equality in Europe? And if so, what does it look like?

Did you know that the European Union has its own Gender Equality Index since 2013? The updated and improved version presented June 25th during an official launch conference in Brussels. Has gender equality in the European Union (EU) progressed since 2005?