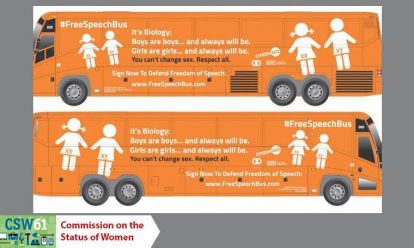 However much support Minister Ploumen has managed to gather for her SheDecides fund, as was very much tangible at yesterday’s side event, it has also generated some fierce opposition with a strong voice here at the UN. We were confronted with this when today during the early morning NGO briefing, a link was shared to a petition aiming to put a halt to the Dutch initiative, asking governments worldwide to refrain from/cease supporting it. The organisation behind the petition is CitizenGO, “a community of active citizens who work together, using online petitions and action alerts as a resource, to defend and promote life, family, and liberty.”

The magic word here is “family.” While seemingly straightforward, it is a much contested concept in the world of the UN and each year a major breaking point during the discussions on the CSW’s Agreed Conclusions. Conservative countries and organisations usually push hard for reference to the traditional concept of the family, consisting of a mother, father and child(ren), in which each family member has a fixed role to play. In this tradtional (and often religiously motivated) view, great emphasis is put on the vital role of women in the family as mothers and caregievers, which to many is God-given. At a parallel event today, organised by the US-based pro-family organisation Worldwide Organisation for Women (WoW), one of the panellists confirmed this when she claimed that roles of men and women are divinely appointed and equal but carry different responsibilities that reflect their unique roles in the family and society. She therefore encouraged women “to gain the knowledge, skills, wisdom, and confidence necessary to assume their natural role as the heart of the home.” Men on the other hand, were told to become “honourable leaders and proficient providers.”

Especially with regards to the priority theme of this year’s CSW – the economic empowerment of women in a changing world of work – this perspective in which women first and foremost are mothers, is problematic as it leaves little room for women’s development outside of the family, particularly in the work place. Progressive delegations advocate for mention of the necessity of a more even distribution of unpaid care tasks between parents, giving both equal opportunity to be economically empowered and independent. It is important here to speak of parents rather than mothers and fathers in order to counter the binary world view of the regressive forces at the UN. Another way to do this is through a more broad and inclusive definition of families, also ecompassing i.a. single parent families, gay couple families and households headed by grandparents or minors (where parents are absent or unable to take care of their children). In this context, progressive delegations usually fight for references to “diverse forms of family”  rather than “the family.”

And they need all help they can get, as the pro-family lobby is usually impressively strong and omnipresent (ha!) at the CSW, and this year’s session is no exception. In addition to the anti-SheDecides petition, CitizenGo has initiated another one asking UN Delegations to keep abortion and related topics out of the final text of this CSW’s Agreed Conclusions, including i.a. comprehensive sexuality education, sexual orientation and gender identity. With regards to the last matter, the latest rather worrying news is that CitizenGo is launching their “free speech bus tour” in New York today. This anti-transgender stunt, which aims to spread the binary, biologically and divinely-determined fixed “truth of gender,” was initiated by the Spanish far-right Catholic organisation HazteOír (part of the CitizenGo network) and has been banned by the city of Madrid.  Our task here is thus to remain vigilant and work with progressive Delegations to oppose initiatives like these and work  to gather support for a text that is as inclusive as possible.

I also knew all too well that the current global wind of conservatism would still be present at the UN, especially with the host country being headed by that other yellow-haired populist.