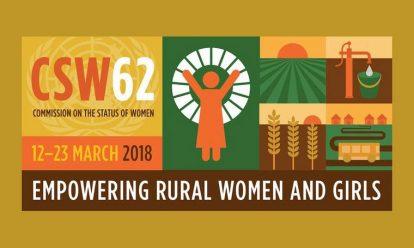 For the next two weeks, the United Nations (UN) will be focusing on women and girls at the sixty-second Commission on the Status of Women (CSW62) which is now underway at the UN in New York.

The CSW’s theme this year is gender equality and the empowerment of rural women and girls. During this fortnight, government leaders and delegations will negotiate a final document. This text will contain binding agreements on various subjects such as violence against rural women and girls, equal participation and leadership, investments in ICT, care and education.

In the Netherlands, Atria, WO=MEN and the Dutch Women’s Council are jointly responsible for the coordination of civil society input. For example, this means that a document has been drawn up for the Dutch government delegation. It was based on contributions from different social organisations active in the areas of emancipation, human rights and – in this instance – rural women and girls.