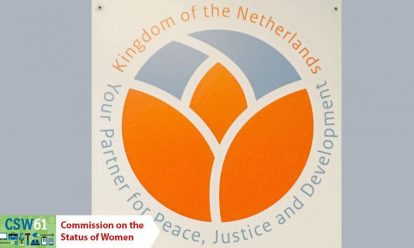 It was with great relief that I boarded my plane to New York Thursday last to attend the 61st session of the United Nations Commission on the Status of Women, knowing that Geert Wilders had not emerged as the winner of the Dutch parliamentary elections. Nevertheless, I also knew all too well that the current global wind of conservatism would still be present at the UN, especially with the host country being headed by that other yellow-haired populist.

With the above in mind, I decided to explore the lion’s den and during the weekend squeeze in a flying visit to the Trump Tower, of which – to my surprise – the ground floor remains open to the general public. Blinded by the shiny gold interior and still smirking at the curious Trump merchandise items for sale (which I did in fact not stock up on, in case you were wondering), I left again.

The most direct effect of Trump’s presidency on women’s rights to date has been the reinstatement and expansion of the global gag rule, which bans US federal funding for NGOs in foreign countries that provide abortion services or abortion advocacy. In response to this, Dutch minister of Foreign Trade and Development Cooperation Lilianne Ploumen last month started the SheDecides Fundraising Initiative, which thus far has gathered around $200 million from dozens of governments. Today, the Permanent Mission of the Netherlands to the UN, organised a side event on advancing safe abortion advocacy in restrictive settings, such as those due to funding cuts like the global gag rule, conservative cultural norms and the discrimination or even criminalization of abortion providers and recipients.

Globally, 44,000 women and girls each year die as the result of unsafe abortion. Countless more are facing stigma, discrimination, injury and hospitalisation, all of which hinder/violate their human rights to health, information, bodily integrity, and autonomy in reproductive decision-making. With regards to the priority theme of CSW61; impediments to women’s access to reproductive health and services also hampers their education and economic development greatly. Three advocates from different NGOs working on the ground in the US, the Philippnes and Rwanda to fight situations like these, shared their views.

The WHO has confirmed that constricting abortion does not make it go away, but merely more unsafe. Clara Padilla from the Philippines – a country with one of the highest rates of adolescent pregnancies – and Chantal Umuhoza from Rwanda – where over 50% of pregnancies are unwanted – agree that it is crucial to stress this when advocating for legalised abortion. “It is sad, but we have to actually raise the fact that women are dying for people to listen.” Documentation, capturing women’s personal stories, thereby putting a face to the problem helps persuade not only public opinion but also government officials, more so than playing the human rights card. Apart from with legal experts, abortion advocates thus also work closely with doctors and midwives to bring in the medical argument and data.

Furthermore, it is important to promote best practices from the region (in Africa i.e. from Ethiopia) to emphasise that legalised abortion is not a Western thing, incompatible with other societies. Where conservative cultural or religious norms prevail, openings for legalised abortion might be forged with regards to cases of rape or incest. The key to success is thus a pragmatic approach rather than a moralistic one. Walking away from the event, I realised that, with conservative forces gaining strength at the UN, this might also be true for the negotiations on this CSW’s Agreed Conclusions. They are expected to continue tomorrow, so stay posted for more updates!

The 60th session of the UN Commission on the Status of Women (CSW) took place in New York between 14 and 24 March 2016. The principal outcome of the annual CSW is the Agreed Conclusions on priority themes set for each year.