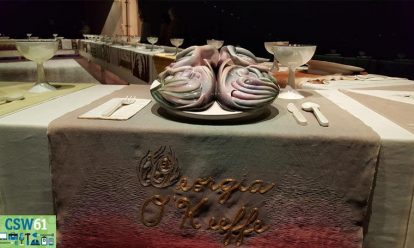 Women are the centre of attention here in New York for the coming two weeks. During the 61st Commission on the Status of Women, held at the Headquarters of the United Nations, women in relation to the world of work are the main focus. So what is more appropriate than to write my first blog about some remarkable women, women of the past as well as women in the present.

Before even boarding a plane you have to undergo an extensive security check. In my case an interview with a security officer at Schiphol, international airport in Amsterdam. The officer in case was woman. Since my husband decided to travel with me to New York we were interviewed at the same time. The first question about our destination was followed by a question about the purpose of our travels. She looked at my husband when she asked this. But I answered ‘for business purposes’. And he added: ‘I am accompanying her, she is going on business, I will be the tourist.’ Her immediate reply was one of astonishment ‘wow, normally it is the man who goes on business and the wife accompanies him.’ She sounded like she was truly amazed and had learned something completely new. But, to be fair to her, she added in an after sentence ‘I really like that’.

On our first Sunday morning we travelled to Brooklyn to see an exhibition about the famous American modernist artist Georgia O’Keeffe (1887 – 1986). She is well-known for her works of art featuring nature (flowers, leafs and bleached by the sun remains of dead animals) but this exhibition focusses on her progressive, independent lifestyle through her self-crafted public persona, including her self-designed clothing and the way she posed for the camera during her almost century long life. She famously said ‘I had a hard time holding on to it [her own name instead of her husband’s name – AW] but I wasn’t going to give it up. Why should I take someone else’s famous name? So when people would say ‘’Mrs Stieglitz’’, I would say ‘’Miss O’Keeffe.’’

Some of her artworks are on display when they serve a purpose in this exhibition as an example of her feminist approach to life. For instance when she tried her hand on painting the city scape of New York. ‘I had never lived so high up before and was so excited that I began talking about trying to paint New York. Of course I was told it was an impossible idea – even the men hadn’t done too well with it. From my teens on I had been told that I had crazy notions so I was accustomed to disagreement and went on with my idea of painting New York.’

This exhibition is part of A Year of Yes: Reimaging Feminism at the Brooklyn Museum. And for all of you in the neighbourhood I encourage you to pay it a visit.*

When you pay a visit and you call yourself a feminist, you have to pay a visit to the most famous feminist artwork of the 1970s, Judy Chicago’s The Dinner Party. The Brooklyn Museum houses this famous installation in their Elisabeth A. Sackler Centre for Feminist Art. It is a modern day shrine to celebrate icons of feminism throughout the ages. This banquet table, in the form of a triangle, hosts 39 place settings celebrating divine women, Renaissance women (like the Dutch 17th century feminist Anna Maria Schuurman  whose name is misspelled as Anna Van Schuurman, but that is a minor detail), and modern day women (like Georga O’Keeffe). On the floor another 999 names of women are enscribed in gold on a white tile floor. So in total is art work celebrates 1,038 women. All of this took the artist five years to create.

Reality is sbout to start happening

So my first day in wintery cold New York was filled with food for the feminist soul and a feast to the eye. Today the real deal starts. I am off to my first morning meeting about the negotiations of the 61th Commission on the Status of Women and will keep you posted via tweets and blogs.

Antia Wiersma. She was manager Collections, Research and Advice at Atria until 1 October 2017.

*Quotes are taken from the exhibition labels.

Women’s rights advocates have seen their hard work pay off as the UN 61st Commission on the Status of Women (CSW61) adopted a set of Agreed Conclusions.

I also knew all too well that the current global wind of conservatism would still be present at the UN, especially with the host country being headed by that other yellow-haired populist.