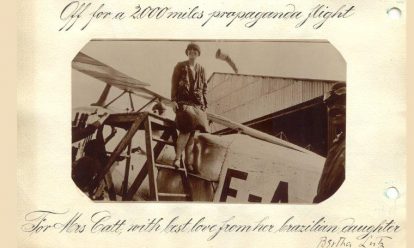 After the Second World War, she donated it to the ransacked International Archives for the Women’s Movement (IAV). She mostly did this in memory of Rosa Manus, who had taken the initiative for the album. Rosa Manus was an internationally well-known advocate for women’s suffrage and peace and co-founder of the IAV in 1935. The jewish Rosa Manus was almost certainly gassed in March 1942 in Bernburg.

In order to promote women’s suffrage, every possible means of transport was used. The Brazilian scientist and feminist Bertha Lutz (1894-1976), for example, used an airplane. Thanks to her commitment, Brazilian women got the right to vote in 1932. Beside this contribution of Bertha Lutz, the album contains forty other contributions.

Lizzy van Dorp (1872-1945) received this particular notebook for her 72nd birthday in 1944. It served as a gift from other women in camp Tjihapit II in Bandoeng on West-Java. It is a collection of recipes from the Indonesian kitchen to which they added their own recipes. Lizzy van Dorp meticulously made diary notes of her last period in […]

In 1924, the Lower House in the Netherlands still used pre-printed envelopes addressed to ‘Den Heere’ (‘Mr’), as shown in the picture above. However, as of 1918 there had been women in the Chambre as well. Dr. E.C. (Lizzy) van Dorp, LL M (1872-1945) was chosen for the liberal party Lijst Van Houten at the first parliamentary elections where […]