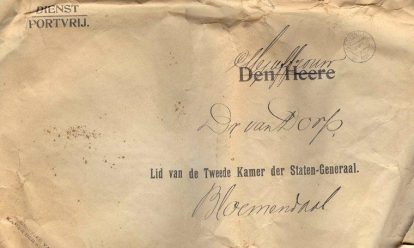 In 1924, the Lower House in the Netherlands still used pre-printed envelopes addressed to ‘Den Heere’ (‘Mr’), as shown in the picture above.
However, as of 1918 there had been women in the Chambre as well.

Dr. E.C. (Lizzy) van Dorp, LL M (1872-1945) was chosen for the liberal party Lijst Van Houten at the first parliamentary elections where women could vote, in 1922. Van Dorp started her period as a Member of Parliament with the publication ‘Het bankroet der tegenwoordigen socialen politiek’ (the bankruptcy of current social politics). She prepared a bill aimed at changing the voting system and voted against the navy law in 1923.

Interesting correspondence with J.B. of Heutz about colonial legislation and about the dismissal of married female civil servants are among the contents of her archive. In that same period she was also president of the governing board of the Liberale Staatspartij (liberal state party).

When the government fell in 1925, Lizzy van Dorp left the party in protest against the protectionist course in which they were steering. After her short break, during which she worked for the Nationale Unie (National Union), she again placed herself on the list for the parliamentary elections for the Liberale Staatspartij. This effort went without success. A second attempt in 1933 also failed. From 1930 till 1936, she was still active within the party executive committee. Afterwards she left politics.

On May 15th 1913, Queen Wilhelmina paid an official visit to the exhibition ‘De Vrouw 1813-1913’ (Woman 1813-1913) in Amsterdam. A couple of months later on August 16th, she came unofficially ‘just to look’. Queen-mother Emma, prince consort Hendrik and crown princess Juliana also visited the exhibition. The exhibition lasted from the 2nd of May until the 30th of […]

This is a poster made by Feminist publisher De Bonte Was (Colored Wash) for a stand on the Emancipade, an event held from the 20th of May until the 8th of June 1975 in Utrecht. Foundation De Bonte Was was founded in 1974, and evolved from women’s discussion groups in the Women’s Center in Amsterdam. The women […]

Throughout the years there has been much singing and poetry writing by women in the women’s movement. Almost every archive contains some kind of ‘union song’. Just like in Josephine Sare Rosine Baerveldt-Haver’s archive. In Atria’s library you can find many published song books. This image is from the struggle for women’s suffrage. Collection Josephine Sare Rosine […]

Strolling through Haarlem’s Kenaupark, one can find the most beautiful villas. In 1938 number 6 was purchased by the Flatstichting voor Vrouwen door Vrouwen (a foundation that wanted to build apartment buildings for women by women). The initiative originated from E.J. van Waveren-Resink (1877-1946) in the 1930s. The establishment of independent housing for women was very progressive at […]