The march on Washington January 21st 2017

Imagine the escalator going down in a subway. Perfectly standard. Only this time it’s used the hard way. Tens of people jump the escalator stairs to get up and out, frantically bypassing the slow pace of the hundreds if not thousands of us, waiting in line to take the usual route going up. Perfectly symbolic: Against all odds we are on our way to join the Women’s March in time to protest against the new president of the USA, Donald Trump. Starting the 45th USA presidency with one of the most dubious records he could have wished for: evoking the most massive and loud protest against an American president ever. Great, greater, greatest. It fits his personality.

The protest was initiated by the end of November 2016 by a few American women, equally concerned as outraged about how women’s rights were getting under siege under this presidency. They succeeded in creating a diverse platform of women and a wide range of NGO’s in the field of women’s rights, and it expanded in including civil rights organizations, LGBT rights, green activists, liberal Islamic organizations etcetera.

There are many reasons for concern. The new president has a worrying track record regarding his opinions on fundamental rights of women (‘grab ‘m by the pussy’, women who have an abortion deserve ‘punishment’), of immigrants (‘build a wall’), of muslims (‘no more into the USA’), of LGBT persons (upholding traditional marriage views). Social justice seems to become a contradiction in terms. American politics will be framed upon a frighteningly myopic mantra as business model: America first. Corporate social responsibility? Global responsibility? Get lost!
Let alone showing kindness or compassion to vulnerable people. Losers!

A not widely published fact (not an alternative one!) awoke my concern on December 22nd 2016. A leaked email addressed at the State Dept appeared in the Washington Post. Trump’s transition team demanded information on “gender-related staffing, programming and funding of activities (that) promote gender equality, such as ending gender-based violence, promoting women’s participation in economic and political spheres, entrepeneurship etc.” A request the State Dept is obliged to answer, sparking off fears of another witch hunt after the climate change activists had been targeted earlier on. When gender equality is under investigation, not knowing why, respect for women’s fundamental human rights are potentially under siege.

The despair of American colleagues and friends became increasingly tangible in their emails. Professionally and personally it felt urgent “to put your body where your belief is when pushing the ‘send’ button is not enough” (Gloria Steinem). Atria’s work on gender equality is inspired by a basic rule of international human rights law: that women’s rights are human rights. The State has the obligation to protect, respect and fulfill these rights for all its citizens. Women are no exception to that rule. Neither are American women.

As a Dutch institute with its core mission to preserve the history of women and women’s movements, and with a strong international orientation in its work, we felt it was our professional responsibility to witness what became obvious: this Women’s March on Washington was going to be a historical event.

When gender rights are under siege, and we seem to be drawn back into times of darkness, it is crucial to know women’s history and remember women’s power. Without the suffragette demonstrations in the 1910s and 1920s women would not have gotten the vote. Without the 1970s demonstrations of the women’s movements abortion would still be illegal. Women’s marches have made a difference in the past. So why not now? 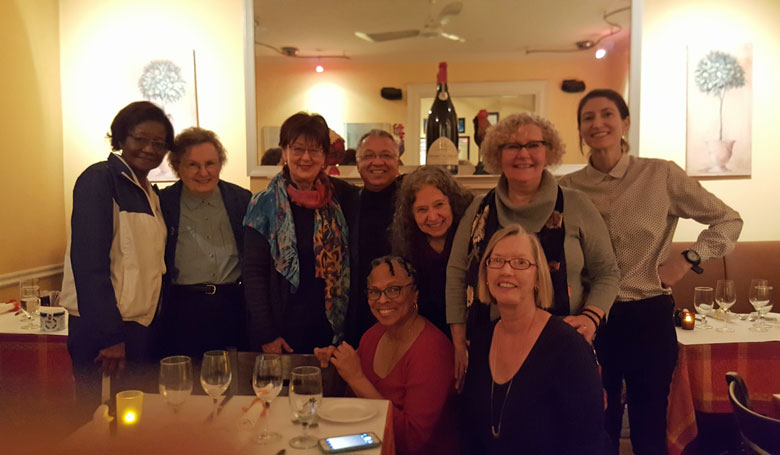 Arriving in Washington on Friday evening, a friend and colleague from Howard University and I met over dinner to discuss our research connections in the field of gender based violence. He mentioned how subdued the atmosphere at Howard was. As the first and only black private university in the US (set up in the late 19th century after the abolishment of slavery) they wanted to distance themselves from Trump’s blatant racism. That afternoon TV sets had been turned off or switched to children’s channels during the inaugural speech.

In the restaurant, chosen for sentimental reasons, we were surrounded by several women getting together for dinner, coming from all over the US, all of them coming to march the next day (Colorado, Lousiana, Minnesota). All excited about sisterhood in serendipity! 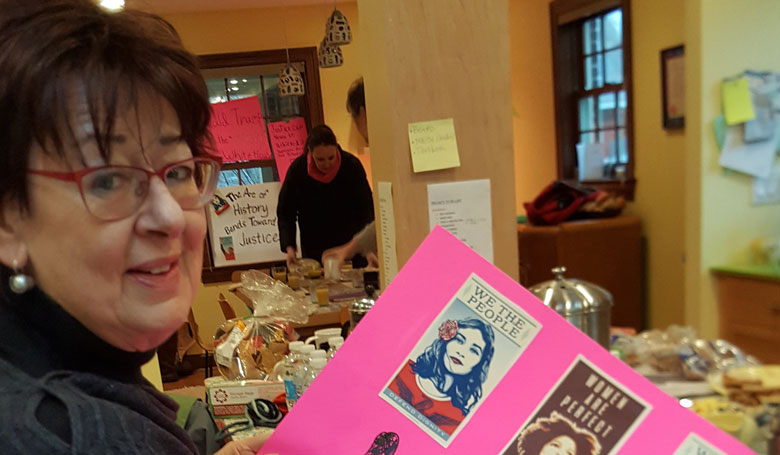 Later that evening at the house of friends I hooked up with friends and colleagues from the DC area, as well as Denver and Philadelphia – all ready to make our own banners for the march, as the organizers had requested. Sure enough: we were all ready to march on Saturday morning. Surprise: one friend had made late-night pink pussy-cat hats: the satirical response to Trump’s infamous sexist plea ’you can grab ‘m by the pussy’. 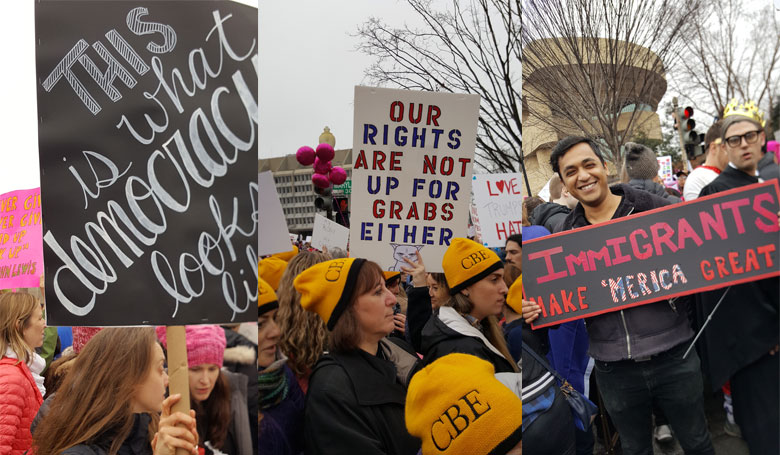 Not in my wildest dreams had I imagined in early January to see the world turn pink in DC. When coming out of the metro endless crowds on the Mall (outnumbering by far the crowds that had attended the inauguration on the same Mall the day before). Waves of hats in all shades of pink. Diversity to the max: women in the majority, joined by many men, young and old, black and white, straight and gay/trans, indigenous people. Whole families protesting, mothers with their daughters and granddaughters. A range of banners: funny, smart, wicked, hilarious, angry – all a testimony to the feminist motto that the personal is indeed political again.

Women’s health – public health. Women Putin pressure on Trump. The future is full of nasty women. Love thy neighbor (no exceptions). A woman’s place is in the house and the senate. Reproductive rights are good for women and men. Immigrants make ‘merica great. Happy marching men. Your silence will not protect you (Audre Lorde). Keep up hope – yes we can. Say nope to the grope. Make America think again. Girls wanna have FUNdamental rights. Pussies against Trump. If abortions are murder then blow jobs are cannibalism. I’m marching for my daughter. Indigenous women rise. Our rights are not up for grabs either. Why are you so obsessed with my uterus? This is what democracy looks like. This is what resistance looks like. Women won’t back down. 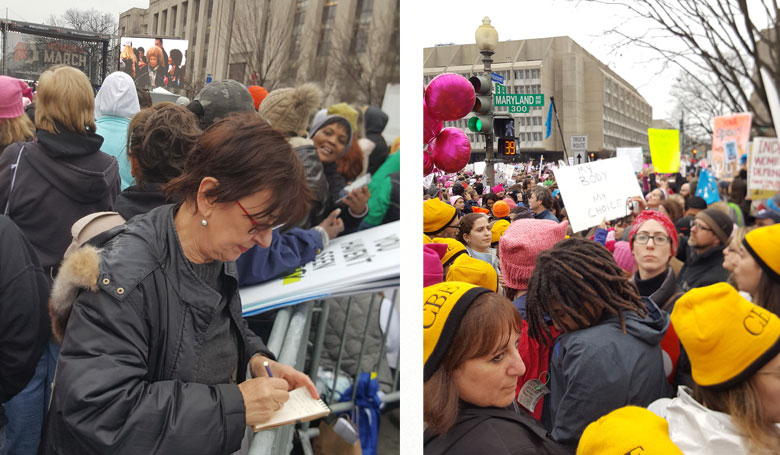 It was obvious: this 2017 Women’s March on Washington was from its very beginning historical in its own right. Together we rallied with what later turned out to be half a million protesters. Sure enough I lost my friends in the chanting crowds within the hour (luckily we had a plan B to meet up afterwards!). But there was no chance one could feel lost in the crowds. The atmosphere was a unique mix of quiet concern, solidarity, sadness, excitement, anger, and underlying it all: an immensely powerful sense of determination to simply resist. Adamant to not accept a presidency that tramples on women’s rights and human rights of anyone, to not accept a presidency that plays with the environment as if it’s a replaceable toy.

This is the most powerful testimony to the power of women organizing, inspiring women around the world. After early January, in just a couple of weeks, 673 women’s marches on all continents were organized with an estimated 4,8 million protesters. Many long standing feminist activists giving empowering speeches. As Angela Davis put it at the Washington march: “This is truly inclusive feminism.” Or in the words of Gloria Steinem ”This is a day that will change us forever because we are together. … No more asking Daddy.”

Change doesn’t come from presidents. It comes from large groups of angry people.

How to go on after this? Again, one of the banners answered: Women standing together will now have to act together. To be continued.