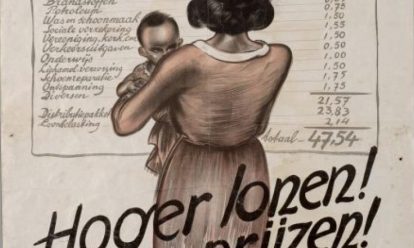 The Dutch Communist Party (Communistische Partij Nederland or CPN) had been a small party before WWII. After the German invasion and the capitulation in May 1940, the party was banned by the occupying forces. However, the CPN was expecting this to happen and had prepared accordingly. The CPN was able to continue her activities in the resistance very quickly.

Many women were active in both the pre-war CPN as well as the CPN during the resistance. Through interviews, the institute wanted to find out why these women became member of the CPN and whether they felt at home in a party which had a strong focus on unity. The interviews are registered on audiotape and where possible on video. Women tell their life stories rather than restrict themselves to the years of war.

Tapes and videos are retained at Atria and are part of the core digital collection Witness Stories (Getuigen Verhalen). The intention is that a future generation of researchers – subject to certain stipulations – can use these stories. The poster shown above was used by Atria as a project recruiting leaflet.