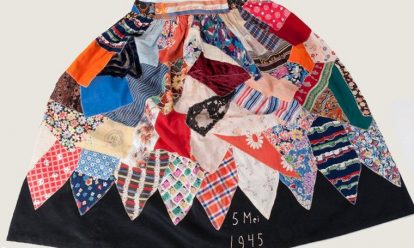 Dutch feminists seized important events within the Royal Family to bring attention to their case by means of exhibitions, memorial books and historical studies. Hence, they also saw an opportunity in 1948, the year of the abdication of Wilhelmina, her golden jubilee and the inauguration of Juliana as a queen.

That year a book was published under the auspices of the International Archives for the Women’s Movement, with the significant title ‘From Mother to Daughter: The contribution of women in a changing world’. Furthermore, the exhibition ‘De Nederlandse Vrouw 1898-1948’ (the Dutch woman 1898-1948) was held in The Hague.

On 3-3-2009 the IIAV (now Atria) recieved a special piece for the archive: a festive skirt. Esther Elkerbout handed the skirt, made by her own mother, over to IIAV-director Saskia Wieringa. (Dutch spoken)

On the 2nd of September that year, a joint celebration of Dutch women took place on ‘het Binnenhof’ (the location in The Hague where the Dutch government resides). A ‘skirt procession’ was the highlight of the festivities.

Resistance fighter A.M. Boissevain-van Lennep was the initiator of the action ‘De Nationale Feestrok’ where all women would wear a patchwork skirt as a festive symbol of solidarity:

‘unity in diversity, new from old, advancement from demolition. A joining of female strengths, colours, individualities’.

Atria owns five skirts, among which the skirt in the picture above, donated by Iet Winkel.