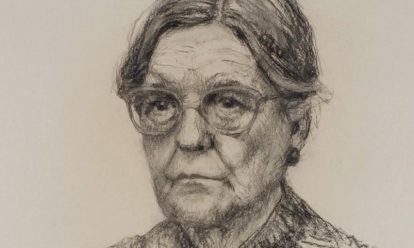 This intimate portrait of Gonnie Scholten was drawn by the artist Rie Knipscheer in 1986.

Gonnie Scholten was born on April 29th 1906 in Spankeren aan de IJssel and died on February 22nd 2005 in Doorn.
In the 1920s, she studied theology in Leiden. In 1931, she married Willem Scholten and had six children.

She wrote a fair amount of sermons and articles on the position of women, feminist theology, women’s peace movement, and church and peace.

C.M.L. Pardede-baroness van Boetzelaer (1912-2011) was an important woman during the Second World War. In 1942, she was co-founder of the Bond van Nederlandsche Vrouwen in Groot-Brittannië (Union of Dutch Women in Great-Britain). From 1940 until 1944 she had been connected to the Ministry of Foreign Affairs, which had its seat in London at the time. […]