Summary:
Contribution to the conference “Five years after” held in 1994 in Budmerice – Slovakia. The conference was dedicated to the fifth anniversary of the “Velvet Revolution” in 1989 and organized by the Slovak writer´s organization. In the article the author summarizes the situation of gender democracy from 1989 and the position of feminist activities in the mid nineties in Slovakia. The view was not very much optimistic: even the democracy after the fall of communism existed already for five years. She reflects how feminism is observed in media in newly democracy and she certifies that it is observed in a very negative way. The article reflects also on sexisms in contemporary Slovak media and in contemporary works of famous Slovak male authors.
The article was originally published in Aspekt journal; by mistake without the subtitle: “Ako je to s feminizmom na Slovensku” (English: “How it is with feminism in Slovakia”.) 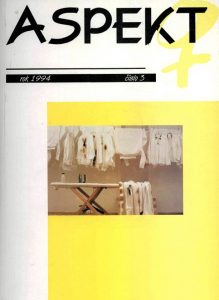 Under the pseudonym of Joana, Anabela Cudell writes one of the first articles about lesbianism in Portugal.

An early example of the new women`s history and at the same time a theoretical contribution to the international campaign for against wages for housework.