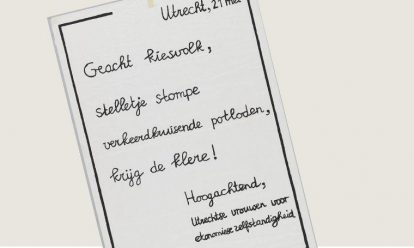 This poster of 43 by 60 cm was mounted on a wall in the city of Utrecht on the 28th of May 1986. It was provoked by the results of the elections a week earlier. The Utrechtse Vrouwen voor Economische Zelfstandigheid (Utrecht Women for Economic Independence) demanded more paid work for women and equal treatment of women within social security. And given the result of the elections, women did not have much hope on that. Anger and disappointment prevailed, as one can tell from the text on the poster.

The archive of this group and other groups which occupied themselves with economic independence can be found in the archives of Atria.