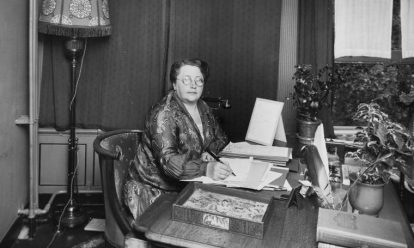 Every year Atria holds a Rosa Manus Lecture. As a tribute to a woman who is of historical importance for the development of women’s position as fully-fledged political citizens and also in the field of history.

Rosa Manus (1881–1942) played a crucial role in the women’s suffrage movement and the peace movement at both a national and international level. In 1935, she was one of the founders of the International Archives for the Women’s Movement (IAV), the precursor of the Atria-archive.
Through this annual lecture, Atria wishes to provide a critical, internationally oriented focus on academic developments that are relevant to women’s and gender history. It is therefore also perpetuating the memory of Rosa Manus and the historical significance of her work.

Rosa Manus (1881-1942) was an extremely energetic, internationally oriented feminist and activist. In 1935, she co-founded the International Archives for the Women’s Movement ( IAV), currently known as Atria. She was involved in organising many of the conferences and events of both the Dutch Association for Women’s Suffrage (now called  Vrouwenbelangen) and the International Woman Suffrage Alliance, which was renamed the International Alliance of Women in 1926.
Read more about Rosa Manus

Rosa Manus (1881-1942) : the international life and legacy of a jewish Dutch feminist