In 1999, Atria received the so-called collection ‘Papanek’. This donation came from the American anthropologist Hanna Papanek. She owned an enormous collection books and grey literature with a focus on women in developing countries, mainly in Indonesia. The Papanek collection was offered to Marjet Douze (then deputy director) who was on the verge of leaving for Boston, the city where Papanek lived. Together they made a selection of the items which would later be shipped to Amsterdam.

Among the documents one could find a thesis and some papers of a certain S. Ann Dunham Sutoro. These documents seemed insignificant, until a sudden interest for them erupted in 2009. Turns out, the writer of this thesis was Barack Obama’s mother. These publications could easily be found at the time because the Papanek collection of Atria was included in the world catalogue of libraries, WorldCat. 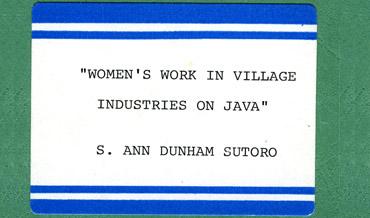 Hanna Papanek with her archives for the Collection-IAV, 1999

Atria’s collection once again proved to be unique, not only in the Netherlands but also abroad. The fact that Saskia Wieringa, the former managing director of Atria from 2005 till 2012, had been cooperating with Ann Dunhum in Indonesia for years made the discovery even more special and close to home. Wieringa wrote an intruiging blog about this cooperation in the summer of 2010.