During World War Two, the German occupiers stole many items from Dutch museums, archives and private individuals that were subsequently taken to Germany. The Americans recovered some of them during the liberation of Europe in 1945, which they either returned to the countries of origin or took back to the United States. Yet the location of many of these vanished items was to remain unknown for many years to come.

Some 47  years later – at the beginning of 1992 – the historian and Russia expert Marc Jansen discovered a “Special Archive” in Moscow that contained miles of archives. During their liberation offensive in 1945, the Russians had also encountered many archives and artworks, and had transported them to the Soviet Union. From 1992 onwards, the Netherlands’ National Archivist, the Dutch embassy in Moscow and the Ministry of Foreign Affairs were primarily responsible for seeking the return of these materials to the Dutch nation. The stolen archives were finally brought back to their rightful owners in May 2003.

More than 28,000 items – approximately five metres of archival records, photos and documentation – were returned. All this material had been collected between 1935 and 1940 by the International Archives for the Women’s Movement and mostly by Rosa Manus herself.

Some of the records that were brought back 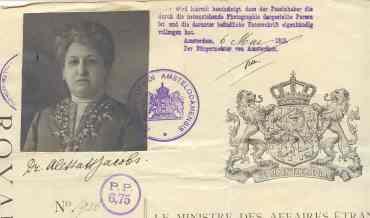 Part of Aletta Jacobs’ visa. It was issued on 6 May 1915 so as to be able to travel in both Germany and what was then Austria-Hungary. 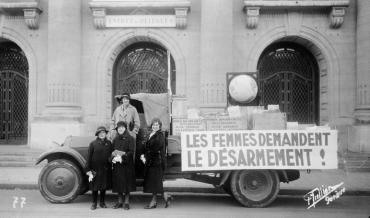 Photo of a signature campaign for disarmament by the Peace and Disarmament Committee of the Women’s International Organisations. On 6 February 1932, nine million signatures were presented at the Disarmament Conference in Geneva. 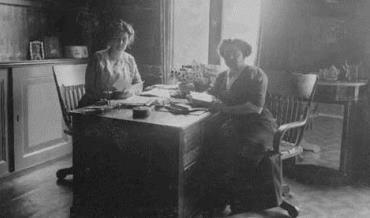 The returned materials also contain many hundreds of photos, both well known and less well known such as this one of Rosa Manus and Mia Boissevain, the initiators of the exhibition Woman 1813-1913.

Germany’s Raubgut Project aims at returning books looted by the Nazis between 1933 and 1945 to their rightful owners. Up to now, 9 books most probably from the International Archives for the Women’s Movement have been found in the repository of the Zentral- und Landesbibliothek in Berlin. Two of them contain Rosa Manus’s bookplate while another one bears the Archives’ stamp. These books were given back to Atria on 3 December 2015. Beroepsarbeid der gehuwde vrouw (circa 1921) by Betsy Bakker-Nort is also one of the books that were returned. She was a lawyer in Groningen and later a Dutch MP.