The game of field hockey made its introduction in the Netherlands in Haarlem. Pim Mulier (1865-1954) introduced hockey there, after he learned the rules of the game at boarding school in England. In the event of a shortage of men, women participated in the game. 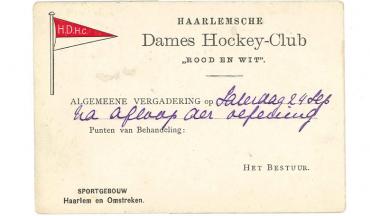 Initially, mixed teams were a common sight. However, after a while women united themselves and began to play in women’s only teams. Shortly thereafter, women’s clubs were formed.
The first women’s club started in Haarlem (Ladies Hockey Club Red White, which was founded by Lady Renée van der Poll Prévinaire) in 1899, after which The Hague and Amsterdam quickly followed. In 1911 they formed the Ladies Hockey Association, the first women’s umbrella organization.

Source: Archive on women and sport from J. Steendijk – Kuypers, a medical historian who after her retirement started researching women and sport. In the library you will find several of her publications.