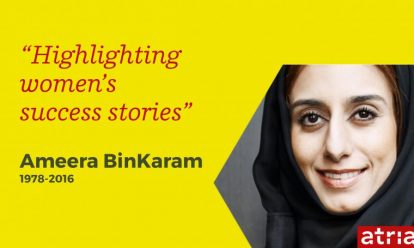 Ameera BinKaram was considered a role model for the empowerment of women in Sharjah, one of the United Arab Emirates. In many of her positions, she fought for women’s advancement and employment participation. Her dedication earned her the 2012 Humanitarian of the Year Award. On 22 October 2016, she was killed in a fire at her home. She was thirty-eight years old.

Even at an early age, BinKaram had an affinity with social work and organised charitable fundraising events at her international school. Her career began at her family’s company, the BinKaram Group. Here, she worked her way up to become its Director of Human Resources Management and was responsible for four thousand employees.

BinKaram also held numerous positions in social organisations. For instance, she was the Chair of the Friends of Cancer Patients Society and the Director of Pink Caravan, which strives to raise awareness of breast cancer. In addition, she was a board member of Education For Employment (EFE), a non-profit, labour organisation for young people in the MENA countries around the Mediterranean and North Africa.

As of 2010, BinKaram was the Chair of the Sharjah Business Women’s Council. In a 2015 interview with Arabian Business StartUp, she described her support for Sharjah’s female entrepreneurs:

“There are so many success stories that have never been heard. So many that we’ve decided to record business women’s stories on video and create an online library for journalists and policy-makers. These stories must be highlighted.”

BinKaram believed in female emancipation. Alongside her work for the Business Women’s Council, she was also Chair of the Emirates Women Award and Vice-Chair of NAMA Women Advancement Establishment. NAMA’s mission is to promote an awareness in the United Arab Emirates that women are essential for the country’s development, and that equal treatment, legislation and policy are necessary conditions for this process. NAMA set up a fund for women’s emancipation to the value of 2,700,000 dollars. BinKaram presented this fund on a number of occasions including at an event for the UN General Assembly in New York. She also spoke at the UN’s “Equal Opportunities for Women Entrepreneurs” meeting that launched its international policy to promote female entrepreneurship and to protect the interests of female entrepreneurs.

The 2016 Global Gender Gap Index was published recently and comprises the World Economic Forum’s international rankings for gender equality. The United Arab Emirates, of which Sharjah is part, was rated at number 124. Women were given the right to vote there in 2006, far fewer women are employed than men and women also earn much less than their male counterparts. However, they are generally more highly educated. In countries with low rankings on the Gender Gap Index, women’s rights are frequently less automatic than elsewhere in the world. With the death of Ameera BinKaram, Sharjah has lost a fervent advocate for the emancipation of women.

Unforgettable Women
In its Unforgettable Women feature, Atria highlights women who have recently died and whose lives were dedicated to the fight for human rights and gender equality. Some of these women were murdered for their beliefs. As the Dutch Institute on Gender Equality and Women’s History, Atria wishes to remember and honour them.