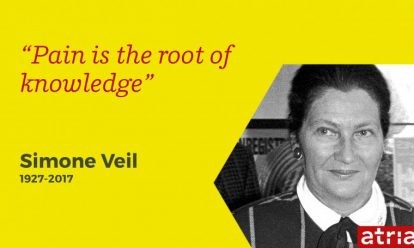 On June 30, 2017, the former French politician, Simone Veil, died at the age of 89. Veil is considered an icon in France in the struggle for women’s rights. She made a name in the 1970s as the minister who legalised abortion. Although Veil hadn’t appeared in public for a long time before her death, her popularity endures. In December 2016, she came in second on an opinion poll for the most popular Frenchman or Frenchwomen behind actor Omar Sy, the protagonist in the film Intouchables.

Simone Veil (Jacob) was born in Nice in 1927 to a Jewish family. She was deported during the Second World War with her parents, sisters and brother at the age of 16. She survived both Auschwitz and Bergen-Belsen. Her parents and her brother were killed by the Nazis. After the war, Veil studied law and political science at Sciences Po in Paris, where she met her future husband, Antoine Veil. They married and had three sons. Although Antoine didn’t really want her to work, she began as a policy official at the Ministry of Justice.

During a trip to Nepal at the end of March 1974, Veil heard that she had been appointed Minister of Public Health. She commenced her career as minister in Prime Minister Jacques Chirac’s government, under President Valéry Giscard d’Estaing, from 1974 to 1979. She was the only woman in the cabinet at the time and was also the first woman to hold her position. As minister, she worked to improve the availability of contraceptives in 1974. On December 4, a law that granted women easier access to the pill and the right to free information about contraceptives was adopted.

One year later, in 1975, Veil managed to pass the legalisation of abortion in France. Veil was a feminist and one of the first to openly side with women who wanted to terminate pregnancies. Veil was supported by President Giscard d’Estaing and Prime Minister Chirac, but was met with enormous opposition from the governing conservative parties. One delegate in the Assemblée Nationale protested by displaying the beating heart of an embryo. Another spoke of ‘slaughterhouses where the bodies of little people are piled high.’ Veil defied the harsh criticism from the right and the occasional, personal anti-Semitic attack. She defended the right to abortion before a full parliament with the following words: “I am sorry that I must do this before a meeting that consists almost exclusively of men. No woman enjoys having an abortion carried out. It is important to listen to women.” Thanks to the support of the left-wing opposition, it becomes possible to legalise abortion. In the night of November 29, 1974, the law was passed by a large majority: 484 votes against 189. Fourteen days later, the Senate voted with the same result. On January 17, 1975, the Abortion Act became a law in France. The symbolic significance was huge. It was a triumph over the Catholic tradition upon which Veil acquired great fame and popularity.

In 1979, Veil was elected President of the European Parliament. These were the first European elections to be held where European citizens could vote. From 1984 to 1998, Veil was the leader of the European Liberal Democrat and Reform Party. From July 26, 1989 to January 14, 1992, she was the deputy chairman of the Committee on Women’s Rights. Veil belonged to the generation of Europeans for whom the Second World War was a living memory and she continued to fight for Europe her whole life. Veil was a member of the European Parliament until 1993, after which she became Minister of Health of France once again for a few years.

In 2000, Simone Veil became president of the Jewish Foundation for the Memorial of Shoah. Even in that position, Veil expressed strong views. She repeatedly refused to fund film projects about the Holocaust that didn’t exactly reflect reality. She often referred to the solidarity of deported Jews and gypsies. Her son told how she never had the number 78651, which was tattooed on her left arm in Auschwitz, removed: “Her arms were often bare in the summer and you could see the number quite clearly.”

In 2010, Veil was admitted to the Académie Française and thereby officially became one of the ‘immortals’ of French public memory. The last time she made her presence felt was in 2013. As an anonymous citizen, Veil was observed at a major demonstration against the proposed granting of same-sex marriages by the socialist government. The Catholic Church had rarely drawn such a crowd since her own Abortion Law in 1974.