In 1898, the inauguration of Queen Wilhelmina was seized as an opportunity to organize a national exhibition on women’s labor, the ‘Nationale Tentoonstelling van Vrouwenarbeid‘. This exhibition in The Hague was a milestone in the history of the Dutch women’s movement.

Women of diverse denominations and background had united themselves for the first time to give an overview of all labor which at that moment was performed by women in the Netherlands. Beginning in 1896, more than 500 women cooperated in the organization of the event.

From the 9th of July until September 21st 1898 many congresses, exhibitions and demonstrations took place. The restricted professional possibilities of women from the middle classes and the miserable working conditions of working class women were brought to attention. 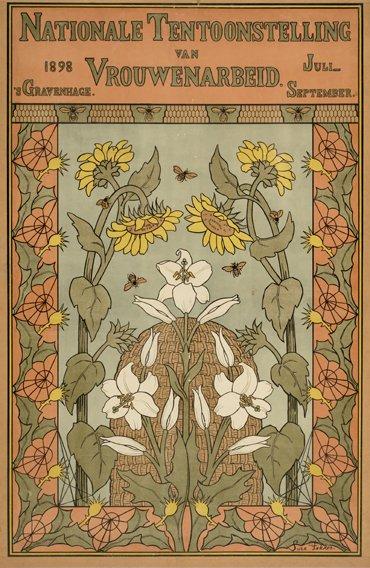 This poster is a design of Suze Fokker. She won the November 1897 Competition For the Colored Show Bill.